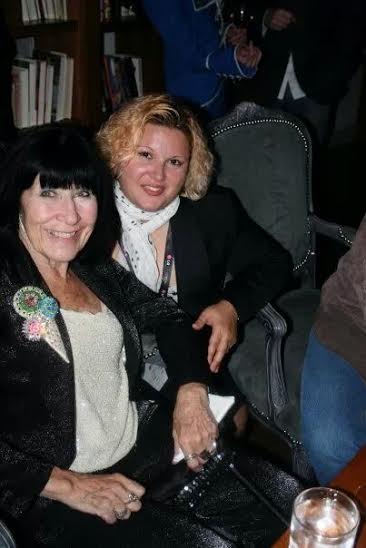 "You expect the bitches to come out when you think about working in fashion, but that wasn’t the lady with the cane and the one bad ear who once sold dresses with pot leaves on them. She wasn’t here for that."

Reflecting on Fashion Week: An Ode to Pat McDonagh, the woman who gave me my start

My last dispatch for Toronto Fashion Week has nothing to do with the shows—I’m going to talk about life, and how much it sucks and doesn’t suck all at the same time.

It was a week to celebrate talent and hard work, but it was also a week fraught with tragic news from within the fashion community. Designer L’Wren Scott was found dead in her NYC home and the Star published a story about Canadian fashion designer Pat McDonagh’s declining battle with cancer. I had fun during Toronto Fashion Week—another successful season that showcased a broad spectrum of Canadian talent—but on the inside I was crying (heck, I was crying on the outside when I read it, too), because Pat McDonagh gave me my start.

I followed a job posting to an unpaid internship in 2009 that led me to Pat, who at the time I hadn’t heard of. And that’s not because she isn’t worth knowing—it is because I was very fresh. I would stand on a wall at fashion shows while Pat shmoozed with people who at the time seemed “fancy” or “rich.” It felt glamorous, different.

I was her PR intern, which, in retrospect, is not a job for me. The job itself was full of personalities that I would never tolerate these days, but Pat McDonagh was different; she wasn’t like most of the people I met during that gig. She was perpetually stressed out, creative, stubborn and eager. She’s exactly what you expect and admire about people who sacrifice wealth and happiness for the sake of their art. She showed me that if she could do what she does at her age and still have a sense of humour, then I could go to school, work a night job and do a full time PR internship all at the same time. So I did. And I sacrificed health, and inevitably regretted it—not because I couldn’t do a good job, but because I had to do a good job and still be able to laugh through the crap, because I had decided that it was the right thing to do. I wanted so badly to have the kind of deeply antagonistic relationship with the self that she did, because, I felt, it made her better.

I remember an average day inside her showroom, which included a steady stream of the worst people—they’d come in and loudly fling platitudes at Pat, and I can’t tell you how many times I saw her shrug them off and yell at people for not focusing on the collection. At the time, she was working on her widely-panned Baskin Robbins-sponsored collection. Pat had no money, and Baskin Robbins swooped in to help out with the tab, which seemed both a detriment and a blessing. Sponsored fashion shows are difficult, not solely because they are often hokey, but because the artist has to answer to some suit who has a chequebook and no clue. She was a sponsored post before the concept had even really popularized. It was both a point of contention and a source of pride, because you could tell she was just happy to keep going.

She wasn’t selling out, she was surviving. She hadn’t made strides with the PYTs that even locally could bolster her career—she had some holdouts from old money, some 40+ ladies who once or still appeared on Canadian television, and a smattering of up-and-coming design talent. It was enough for her, and I know it was because she was struggling to pay the rent, in declining health, and still kept going—pushing herself and her interns to make something beautiful, even when it had to look like ice cream.

You expect the bitches to come out when you think about working in fashion, but that wasn’t the lady with the cane and the one bad ear who once sold dresses with pot leaves on them. She wasn’t here for that. It was then that I decided that I wasn’t here for that either, and even though I like fashion, I wouldn’t celebrate the arrogance and trainwreck attitudes of the self-proclaimed cultural elite.

So, I cried this week. A lot. Not because we’re best friends, because we’re not. But because she represents a woman that survived an industry that can really make you hate your life and question your hopes and dreams. She reminds me that feeling like that shouldn’t be expected or tolerated, and that there’s a really good reason that people say you should “do you.” It’s frankly the only way to stay alive, and feel good about what you’ve accomplished.

Here’s to you, Mrs. Robinson.