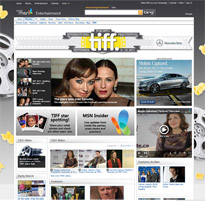 Relive TIFF with the best photo gallery on MSN.com

Photos of all the celebs
Hands down, the best gallery to catch up on all the film fest moments is on MSN.com. Combining photos that you submitted with the very best behind the scenes action, from frantic signing of autographs to candid party shots, the MSN.com TIFF gallery is the ultimate procrastination zone to catch up on all the buzz that was TIFF 2011.

Missed it in TIFF? Hit the theatre now!
And now that it’s all over, hit the theatre and catch the films that received the most praise. In this interview, Ryan Gosling talks about how he was influenced by John Hughes and the 1980s aesthetic in DRIVE. We saw it this past weekend, and aside from watching Gosling take on a tough guy role, loved the style of the film from the opening credits to killer soundtrack. (We’ve already downloaded it… so good!)

Share your TIFF memories!
Still have photos on your phone from red carpet premieres? Share them on the MSN Postbox! We wanna see what you got up to.