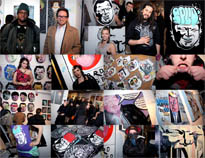 A unique art show at Don’t Tell Mama Gallery (108 Ossington Ave), up for the month of March, is showcasing one-of-a-kind graffiti-inspired art in a commonly consumed format. Infamous Toronto graffiti artist SPUD has his very own gallery show, filled with works questioning and poking fun at our Mayor, His Gravyness Mr. Rob Ford. What a serendipitous way to merge a worldwide artform, considered by some to be criminal vandalism, with downtowners’ dissatisfaction with their Mayor?

If it were my choice I would have murals everywhere, on the front of my house even. They’re beautiful, colourful and waaaaaay cooler than the colour of cement. But I’m aware there is a slight possibility I don’t have the same opinion as most. Neighbourhoods like Callejon de Hamel in Havana, Cuba, and The Heidelberg Project in Detroit, Michigan, inspire and heal neighbourhoods through art. They’re also two of my favourite places in the world. I want Toronto to always be on that list, too. It’s sad to think many important things are being threatened in Toronto right now.

Other than (hawt) graffiti enthusiasts, media, the generally curious, people who made me guess in my head if they were, in fact, SPUD, and obvious lefters who were at the CENSORED opening Thursday, March 8, it’s the people who would never think of going who I hope go to this show. And for the record, SPUD was not there. You think he’s crazy?!

We posed a question to attendees, and below are answers + photo gallery: “If you could talk to Rob Ford or Spud about one thing, who would you choose and what would you ask them?”

Stu chose Spud: “How do you get your tags so high in the middle of the winter?”

Christina chose Spud: “I would meet with Spud again, cuz Rob Ford doesn’t seem to listen, and I’d rather have a dialogue. People without power are the ones who usually end up changing things”

Rex chose Rob Ford: “What was it like to star as Chet in Weird Science?”

Fiona chose Rob Ford: “Why are you punishing small businesses for having graffiti?”

Brooke chose Rob Ford: “If graffiti is one of the biggest art movements, why are we trying to silence it instead of lift it up?”

Patrick chose Rob Ford: “Why do you have such a problem with Art?”