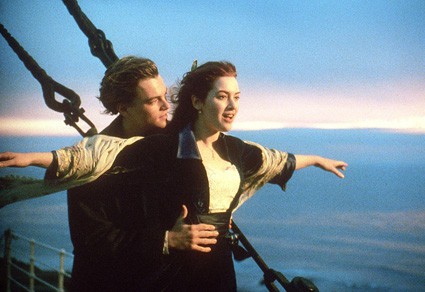 Normally it’s hard for me to think the word Titanic and not have the first few eerie notes of Celine Dion’s My Heart Will Go On float through my head, but Robert Ballard makes it easy.

The famous (he has a character on 30 Rock!) National Geographic Explorer-in-Residence discovered the legendary shipwreck while working for the U.S. Navy (the whole thing was actually a cover for the mission they were really on, if you can believe that), but says it’s far from his most memorable find below sea level. I was lucky enough to hear him give a talk at Roy Thomson Hall (the second installment of this year’s National Geographic Live series) on Dec. 3, and it was great.

The thing with Titanic, Ballard says, is that it was just lost but everybody already knew it existed. For him, the more exciting exploration happens when you stumble upon something you didn’t necessarily know was there, like a really creepy-cool worm thingy that was 10 feet long and had a bit of blood stuck inside of it (um, ew, but also SUPER COOL). Ballard has found ships that date back to before the Common Era, unraveling the very threads of human history with his curiosity and his innovation. Ballard did four (FOUR!) degrees in university (and he’s Dyslexic!), so he’s smart. Really smart. And he’s put his brain to good use, inventing exploratory machines and robots that let scientists go deeper and deeper into the water, letting humans today essentially go back in time. He’s even, in some cases, found human remains (I repeat: Ew, but SUPER. COOL).

Ballard’s talk was funny and incredibly informative, with diagrams, illustrations, pictures, and videos to help his audience (a packed one, I might add) understand the world below the water and his subsequent love for it. And it worked: both my friend Chelsey and I walked away from the evening saying, “I want to go exploring!”

As a little kid Ballard was inspired by Captain Nemo, a character in Jules Verne’s Twenty Thousand Leagues Under the Sea. That childlike fascination with underwater exploration has stayed with him, even though he’s now 70 years old. He runs the much-acclaimed Jason Project, educational programs for all ages, and lets people watch live stream videos of his team’s latest explorations, which is super duper rad. The last thing Ballard said before exiting the stage was that he’s still a kid, joking that he gets along better with children than adults. I can’t speak to his social skills, but I think it’s safe for me to say that Ballard definitely had the most youthful heart in the room.