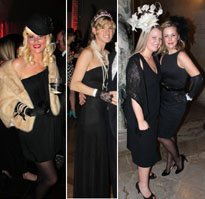 ROM PROM: Night at the Museum

So I said yes to the ROM Prom. After all, who doesn’t dream about spending a night in a museum amongst dinosaur skeletons and priceless Buddha statues?

Now in it’s fifth year, the ROM’s Young Patrons’ Circle once again held a kick-ass fundraising gala – or the annual PROM – to raise money for underprivileged schools in the GTA to attend educational field trips.

And when it comes to throwing a party, the sky high ceilings, exposed brick and dinosaur bones really make for an interesting experience. The place that normally houses tourists clutching their maps and cameras was transformed into a pseudo-classic Hollywood soiree. Black and white films were projected onto the giant walls and massive venue glowed deliciously pink. Gentlemen looked dapper in tuxes and fedoras, while ladies wore enough feathers on their heads to clothe an ostrich. The Hollywood theme was quite convincing in the early hours of the party as a band raged and a dance crew showed off their best Charleston-esque moves. Suddenly though, Lady Gaga started blaring, and at this point the PROM took an indulgent and rowdy sharp turn. However, it was when they started playing “Sweet Child Of Mine,” and my plus one got hit on by his gay doppelganger that it was time to go.

The event was hosted by MTV’s Dan Levy and Jessi Cruikshank. It didn’t seem like they did much (though I arrived half an hour late, perhaps I missed something), they were, however, spotted briefly at the food table, and I don’t blame them, the glazed salmon was delicious. Overall it was a beautiful event for a beautiful crowd of Toronto’s finest. We hope the kids enjoy the new bat cave.