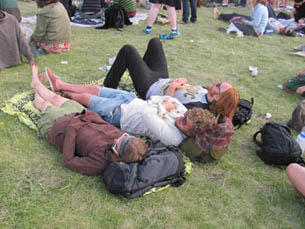 On the third day, we sleep in. We sleep in, and then we devour a bottle of wine and several PBRs in the back of our car while sunshowers drizzle down on the campsite and friendly festivalgoers make the rounds, giving away joints and guacamole. We make friends with a pitbull, and watch a game of beer pong accessorized with viking helmets. As the afternoon grows tall (heh), we make our way to the grounds in time for Passion Pit. A giant inflatable whale makes its way above the heads of the crowd and Michael Angelakos is delighted. "Get that whale up here!" he shouted. "Now sing! Sing to the whale!"

On the Bigfoot stage, the Mountain Goats delivered an amazing set of solid, storytelling folk. As the sun spilled from behind the clouds, John Darnielle grinned out at the crowd. "I know this is corny but I just love playing music so much," he said.

Band of Horses brought out the crowds and rainbows (literally) at the Main Stage, playing all the old favourites and injecting an energy into the new songs that isn’t present on the album. And finally, we pushed our way into the throng for the strangely anticlimactic MGMT. Andrew Van Wyngarden seemed happy to be there, showing off his patchwork jacket, and Ben Goldwasser cowered behind his faulty keyboards, seeming pissed that no one knew the words to their new songs. After the crowd surged with disturbing ferocity to the front of the stage for a mid-set rendition of Time to Pretend, Van Wyngarden smiled halfheartedly out at the crowd. "Hope you had fun." Keyboard issues and a strange lack of enthusiasm kept the set from living up to the expectations of the crowd-you get the feeling MGMT would have done it the same way at a tiny, crowded basement bar. They’re great, but they’re just not the band everyone wants them to be. At least anymore. And they’re really okay with it.

And so, listening to the strains of Neko Case over wise words in the media tent ("Just know that if a pretty girl offers you wine, it’s probably not just wine."), the festival wound to a close. Sasquatch has more the feel of a great concert than a festival, but it’s a small and lovely three-day music jam that will remind you why the best way to hear your favourite band is under the sun with a Gorge full of their biggest fans.

Keep Blogging Sexy. We do.

Getting ready for MGMT