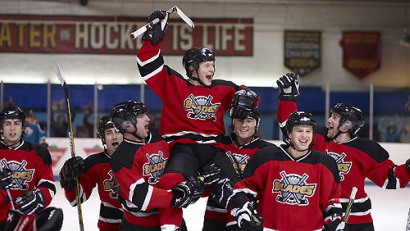 When Canadians love hockey as much as they do, it’s no surprise TIFF decided to open with a movie-musical about the sport. There is something genuinely engaging and heart-warmingly comedic about Score: A Hockey Musical. Add a few mullets, some missing teeth, and a couple of bloody noses to cheeky musical numbers and on-ice male dance routines – save the glitter a la Priscilla: Queen of the Dessert – and you’ve got the best jock-fueled musical inspiration since “Single Ladies” hit Glee. Score follows the life of Farley Gordon (Noah Reid) a home-schooled seventeen year-old who plays shinny on the local rink (clearly signed by Toronto Parks & Rec) and one day is discovered by the Brampton Blades. His parents, played by Olivia Newton-John and singer/songwriter Marc Jordan, object the idea of their cultured Aristotle-reading son competing in organized hockey, a seemingly barbaric activity. Like any hormone fluctuating adolescent, Farley ignores his parents’ advice and shows up at the rink despite their best efforts. Hockey fills a void in Farley’s life as he channels a young Sidney Crosby, but he soon realizes he can’t actively raise his dukes to any opposing players; he simply can’t fight.

Director Michael McGowan (Saint Ralph, One Week) takes a light-hearted look at a very serious issue that has plagued Canada’s favourite game for years. Rejected by his coach and tossed around in a teenage romance with best friend Eve (Allie MacDonald), Farley recognizes he needs both hockey and the girl in his life to be complete. McGowan showcases his hometown of Toronto in its wintery delight with iconic venues like Nathan Phillips Square and the Art Gallery of Ontario. The film features cameos from Canadian stars George Stroumboulopoulos, Nelly Furtado, Evan Solomon, Steve Kouleas, Theo Fleury, Hawksley Workman and most notably Walter Gretzky. Hockey fan or not, this movie accurately constructs an image of Canadian culture, low brow or otherwise.
–Julie Stewart-Binks