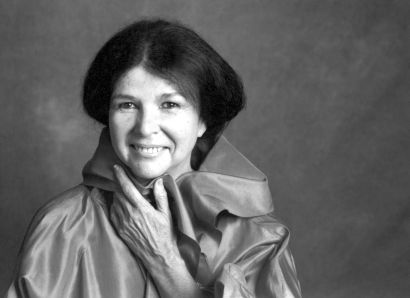 Canadian documentary filmmaker Alanis Obamsawin was born during a lunar eclipse, and she has continued to be no stranger to extreme and extraordinary situations. Whether she’s crouching behind barbed wire during a stand off between Mohawk warriors and the Canadian army, or stealing an hour of sleep on a rock beneath the light of shooting flares, she has made a career of capturing the dramatic, and often dangerous, continuing dialogue of the First Nations struggle in Canada. She is celebrated and admired for her long career dedicated to capturing the spirit and stories of her people.

“Listen to this woman,” says a student recounting the words of Canadian father of documentary John Greyson. “You will hear wisdom from another world.”

So we did. We spoke with Alanis to ask her about her long career, and the politics of storytelling.

“I think that documentary is the real voice of the people,” she says. “It’s the place for them to be heard. It’s not transmitted by somebody else, it’s the direct voice. The beauty of film travels on its own.”

Obamsawin has a 38-year, 35 film career documenting the First Nations struggle in Canada. She was honoured with an Outstanding Achievement Award Retrospective at this year’s Hot Docs Festival, reminding Canadians of the legacy of First Nations activism captured by her camera. “It’s such a big honour. I think that Hot Docs is the best in America. They’re so wonderful to documentarians, they care about us. To bring [our films] to the world in a venue where you get such a wide audience, what more can we ask for?”

Alanis began her career as a singer, sharing traditional First Nations songs and stories. But the political plight of First Nations people in Canada led her behind the camera. “[I began] filmmaking not necessarily because I saw other films. It was because of our situation, hearing stories from the people, and knowing our situation. This is really what drove me.”

Asked to describe her most difficult filmmaking experience, she cites her 78 days in the Oka community, chronicling the stand off that would become her film Kanehsatake: 270 Years of Resistance. The film captures a community’s struggle to defend its sacred burial ground from developers, and local politicians, who want to expand a golf course. Mohawk warriors and the Canadian Army engaged in a bitter armed stand-off, and the First Nations resisters were brutally beaten, held behind barbed wire, forced to sleep under a barrage of army flares, and trapped by the army on their own land. “It was very overwhelming and very difficult. First of all, it was a very dangerous place to be, there were guns, which simply doesn’t make anybody feel comfortable. And there were constant conflicts, you never knew what was going to happen next. Especially, the night time was very hard, and very scary. That would be the most difficult documentary that I’ve had to do.”

Her use of the phrase ‘had to’ is very telling. To Alanis, it seems, filmmaking is not merely a right but a responsibility. Having spent so much time documenting people who are fighting so passionately for a cause, we asked Alanis what she thinks it means to be a hero.

“A person can be a hero in a home, within a family, for the way you raise your children. There’s heroes everywhere. People do important things everywhere. Everybody has a certain importance to the life of a family, an individual, and people at large. If you’re concerned about others, then obviously you become important to a lot of people. You’ve helped your child to grow, to be free. Everyone can be a hero to another person in a most simple way.”

Obamsawin, a member of the Abenaki nation, was born in 1932 on a reservation in New Hampshire, but lived until the age of nine on the Odanak reserve, north east of Montreal. Speaking little French and no English, she moved to Trois Rivieres and was cut off from her native culture. She clung to the songs and stories told to her by an aunt on the reservation, and remained deeply connected to her roots.

She was hired by the NFB after they saw her sing on a television program, and was working as a consult on Aboriginal issues, before she began to document the struggle of her people on her own. A member of the Order of Canada since 1983 and a 2008 recipient of the Governor General’s Award for Lifetime Artistic Achievement, Obamsawin is no stranger to high-profile accolades. But the most motivating reward, for her, is change.