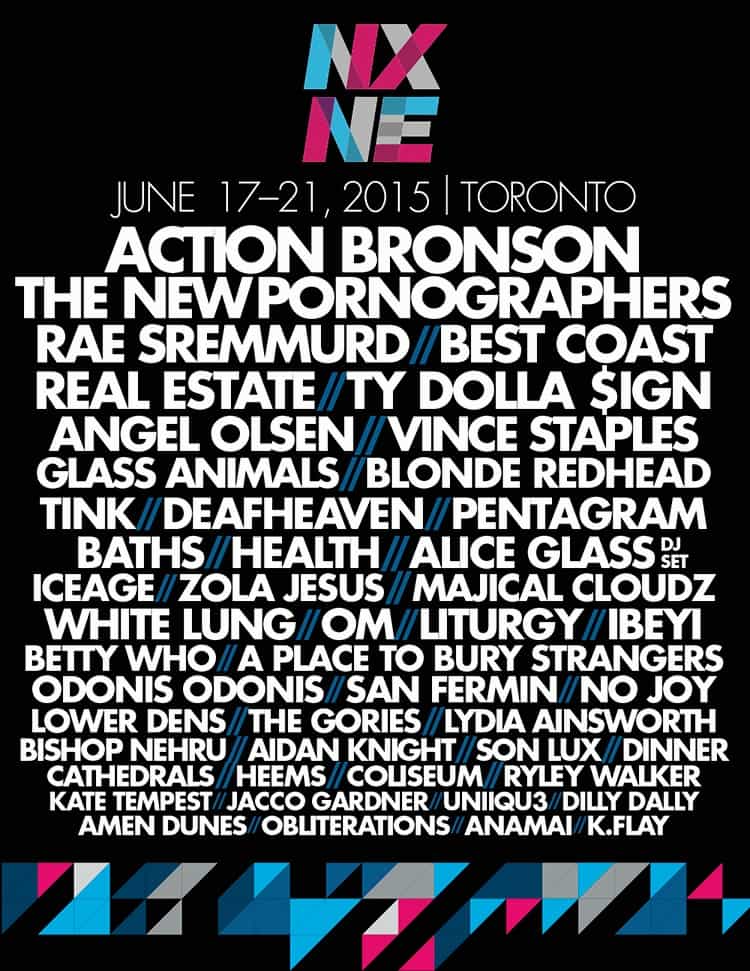 With over 1,000 bands set to take the stage this year as part of North by Northeast, navigating the lineup can be a difficult task. Here are our picks for the must-see shows and parties for this year’s festival.

Individual tickets and wristbands can be purchased online.

Great Heart Festival is a free, four-day unplugged daytime music series in the heart of Trinity-Bellwoods, put together by the good folks at Humble Empire and Young Lions Music Club. Though it’s not an official NXNE event, the Great Heart takes place during the heart of NXNE and features artists slated to play the festival. Stay tuned to their Facebook page for lineup announcements.

Drawing inspiration from classic soul crooners like Otis Redding and Etta James, and the future beats of Flying Lotus and Evil Needle, Allie has created a sound all her own. The Toronto native released her debut solo EP, Strange Creature, in Fall 2013.

It’s hard to believe Blonde Redhead has been around for 21 years. The New York-based trio of vocalist/guitarist Kazu Makino and twin brothers Simone and Amedeo Pace formed in 1994 and have released nine albums since, including last year’s Barragán.

Oxford quartet Glass Animals released their debut album, Zaba, in 2014 to rave reviews. Their sound toes the line between psychedelic pop and alternative R&B, with some tropical percussion thrown in for good measure.

DIANA started off as a recording project with no intention of touring, but that changed as soon as their early demos started to take off on SoundCloud. The Toronto indie-pop band has opened for Austra and had their debut, Perpetual Surrender, longlisted for the 2014 Polaris Music Prize.

Nika Roza Danilova is known for her known for her powerful vocals and haunting music, drawing comparisons to the likes of Kate Bush, Florence Welch, and Karen O. She took her moniker from French writer Émile Zola and Jesus Christ. “There was a dichotomy — Zola was for truth and Jesus was for spirituality,” she told Studio 360.

Admit it: “Whip My Hair” was your jam back in 2010. Willow Smith now has 13 additional singles to her name, including collaborations with Nicki Minaj and her brother, Jaden.

For their debut album, GROUNDERS set out to rediscover their love of classic pop and turned to David Bowie, Devo, The Velvet Underground, and Neu as sources of inspiration. The result is a collection of fun, catchy songs perfect for a lazy summer day.

U.S. Girls is actually just one girl – Illinois-born, Toronto-based artist Meg Remy. Her music explores themes relating to abuse and gender inequality from the perspective of an “everywoman.”

I stumbled upon Lucius at Bonnaroo a few years ago was immediately hooked. Between their catchy lyrics and the luscious harmonies of vocalists Jess Wolfe and Holly Laessig, there’s a lot to like about this Brooklyn five-piece.

HEALTH is a four-piece noise rock band hailing from Los Angeles. They first gained notoriety in 2007 when the now-defunct Toronto duo Crystal Castles remixed their song “Crimewave.” After taking a bit of a hiatus the past few years, the band will release their long-awaited third album, Death Magic, in August.

If you haven’t been to one of Tim McCready’s 159 Manning parties, you’re seriously missing out. This year’s soiree is presented by M for Montreal and Hand Drawn Dracula, and features performances by Serf Kanata, chastity, beauts, Pat Jordache, Dead Obies, Sasha Chapin, Birds of Paradise, Marvelous Mark / Bad Zeppelin, Jr. Mintz, Vallens, Heaters, Clairmont The Second, BART, The Muscadettes, and Fat As Fuck. Complimentary pizza provided throughout the day by Panago Pizza and veggie burgers cooking on the BBQ. Bring your own beverages. Tickets are $20 at the door or free with a NXNE wristband until 5 p.m.

Real Estate’s brand of carefree, psychedelic surf rock just screams summer. The New Jersey-born, now Brooklyn-based indie rockers have released three albums since forming in 2009, the latest of which was named one of The 100 Best Albums of the Decade So Far by Pitchfork.

Atlas Sound is the solo project of Deerhunter frontman Bradford Cox, who came up with name as a sixth-grader in 1994 while making recordings on a karaoke cassette machine bearing the same words. He’s released three albums under the moniker: 2008’s Let the Blind Lead Those Who Can See but Cannot Feel, 2009’s Logos, and 2011’s Parallax.

Warpaint was formed in Los Angeles in 2004 by childhood friends Theresa Wayman and Emily Kokal, and sisters Jenny Lee Lindberg and Shannyn Sossamon (the latter of which left the band in 2008, being replaced by Stella Mozgawa). Their music is haunting and intense, perfect for a late-night drive.

Like the name suggests, Summer Heart is all about the feel-good vibes. The solo project of Swedish singer-songwriter and multi-instrumentalist David Alexander, Summer Heart will instantly transport you to a warmer, happier place.

I’ve been listening to Best Coast’s latest album, California Nights, non-stop this month and was thrilled to see them headlining NXNE this year. Their sound is distinctly West Coast, drawing inspiration from the surf jams of the 1960s and ’90s slacker rock.

Vancouver indie rockers The New Pornographers started making music together in 1999. 16 years, six albums, and several side projects later, they’re still going strong. This is one act you won’t want to miss!

Irish noise rockers Girl Band, currently at work on their debut album, have gained a reputation for putting on loud and intense shows. The band cites Bad Brains, James Chance and the Contortions, Neu, and minimal techno among their influences.

Casey Veggies was one of the founders of hip-hop supergroup Odd Future and was the first member to strike out on their own following the release of his first mixtape, 2007’s Customized Greatly Vol. 1. His debut album, Live & Grow, is due out later this year.

Longtime friends Matthew Moldowan and Jeffrey Josiah Powell make up Fine Times. The duo shares an unabashed love for pop music, and have been striving to achieve pop perfection since forming in Vancouver in 2010. Fine Times teamed up with The Zolas’ Tom Dobrzanski and mix engineer Dave Bascombe (Charli XCX, Depeche Mode) for their latest album, slated for release this year.