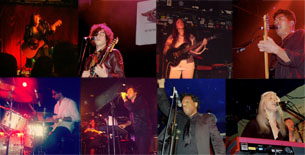 She Does The City Does Canadian Music Week 2012

Canadian Music Week was a week of tests. It tested out your decision-making skills (Which bands to see? Which to skip?) It tested out your 416 navigating abilities (The true experts know how to efficiently hop from bar to bar, using bikes and back alleys if necessary to make as many sets as possible). It tested out your stamina – the long lineups, sweaty front row, and 4 am last call were like a Survivor endurance challenge for an immunity win. It tested out your taste in music, your knowledge of Canadian history and the capacity of your eardrums.

She Does the City did Canadian Music Week and while we couldn’t possibly split our bodies in two (or eight), we tried our best to tackle the best of CMW.

The Postelles, Tribes and Wildlife at Lee’s Palace

The Great Escape showcase on Thursday had a pretty stellar lineup: New York City rockers The Postelles, Brit indie rockers Tribes and a foursome of local bands that included San Sebastian, Wildlife, Dirty Mags and Indian Handicrafts. Add Lee’s Palace to the mix and you’ve got yourself a rock n’ roll show, baby! (Which is probably why I stuffed my face with poutine guilt-free beforehand; leather jackets are very forgiving.) Highlights included The Postelles revealing a new song and girls going crazy for Tribes (it’s that British Invasion thing, right?). It’s tough to pick a favourite band of the night, but Wildlife did it for me with their great chemistry and lyrics that have the ability to take you to another, greener place. ~ Caitlyn Holroyd

On Thursday, I scored a two-for-one deal as Reggie Watts stunned me with his hip-hop electro beatboxing slash improv comedy set as part of the Canadian International Comedy Fest. The Brooklyn-based ?uestlove doppelganger and Conan O’Brien fave, Reggie Watts’ brand of comedy was, well, different. Weird streams of out-there consciousness mixed with heavy beats and prolonged loops made Reggie one of the most interesting cats to tickle our funnybones since Zach Galifianakis. After his series of quips about time travel, Hammy the Hamster and other Canadian references paired with his fake French banter, Reggie finished his almost two-hour set with an impromptu dance party that rattled our insides and got the audience out of their seats. ~ Desiree Gamotin

Martha Wainwright and The Dears at El Mocambo

Speaking of French (Canadian), right after Reggie’s comedy set I was able to catch the last couple of acts at La Belle Province Night at El Mocambo presented by SiriusXM and CBC Radio 3. Rufus has nothing on his sister, the lovely folk-rock warbler Martha Wainwright, as her short but sweet set struck all the right strings in our hearts. Cut to 1 a.m. and the crowd was still going strong. Montreal favourites The Dears “survived the night” despite standard mic and sound problems and satisfied nostalgic fans with “Lost in the Plot” and “The Death of All the Romance” only to bounce back onstage for a final encore. After being around for 17 years, The Dears still got it. Don’t mess with them. ~ Desiree Gamotin

East Coast music by day, Arts and Crafts by night
What could be better than a post-work week East Coast music party while the sun’s still out? Can’t think of anything. Following the deep-dimpled roots rocker Tim Chaisson and Morning Fold, I caught a snippet of Ben Caplan and the Casual Smokers on the Sneaky Dee’s stage. Already having played a boatload of shows including the Official Opening Gala with Joel Plaskett at the CN Tower and Sonic Boom early during the day, Ben Caplan was a CMW hot commodity. Kicking off his set with “Drift Away,” his deep, raspy voice and melodramatic melodies filled my belly like a mug of Baileys hot chocolate.

And then the decision-making skills really went into full gear, but my long time love affair with Broken Social Scene and Co. sold me on the Arts and Crafts Showcase, where newly signed on bands like Snowblink and Gold & Youth impressed the rammed venue. Familiar faces also graced us with their presence as Justin Peroff from BSS and members of The Stills combined talents to create their latest moody project Eight and a Half. The Darcys and Zeus made waves soon after while “Secret Guest” Dan Mangan played a long set, which made the around-the-corner lineups outside The Horseshoe worthwhile. ~ Desiree Gamotin

BADBADNOTGOOD at Wrongbar
I wrote about BADBADNOTGOOD back in September when they were about to play their very first show, and the trio of guys from Humber College have come a long way since then. Jamming with Tyler, The Creator, opening for jazz-funk pioneer Roy Ayers at the Mod Club, and performing at BBC personality Giles Peterson’s Worldwide Awards in London, England. Not bad for band that never really intended on being a band. Their show at Wrongbar covered everything from James Blake to Kanye and I was mesmerized the entire time. Also, ever heard of a mosh pit at a jazz show? It happened. ~ Caitlyn Holroyd

Teeth & Tongue at the Aussie BBQ, Brendan Canning’s curated night at The Garrison
The El Mocambo played host to the Aussie BBQ Saturday afternoon and I arrived just in time to watch Teeth & Tongue (a.k.a. Jess Cornelius) perform. The woman has killer vocals and stage presence, and her soulful songs provided the perfect soundtrack to a lazy afternoon. Also, more shows should have a BBQ component.

Come nighttime, I made my way to The Garrison for Young Lions Music Club’s Artist Select Series featuring Broken Social Scene’s Brendan Canning. Considering he was DJing/hosting, I was surprised The Garrison wasn’t packed to the brim (in the words of Milli Vanilla, blame it on the rain). The Balconies took to the stage just as I arrived and played a fun, energetic set that had the crowd trying to keep up. “Can we get sexy for a minute?” asked singer/guitarist Jacquie Neville at one point. It’s impossible to rival Jacquie when it comes to getting sexy, but I tried. Next up was ALX, the synth-pop band fronted by Allie Hughes, a theatrical singer who has previously worked with musical mastermind Andrew Lloyd Webber. In what was just the band’s second performance, ALX was haunting and catchy, and Hughes’ eccentricity had my eyes glued to the stage. ~ Caitlyn Holroyd

Oberhofer and The Temper Trap
After my pre-concert stretches and last can of Red Bull, sleep deprivation couldn’t keep me from catching the sold-out Temper Trap show at the Phoenix – my last CMW hurrah. The uber popular Aussies of The Temper Trap were pitch-perfect with faves like “Sweet Disposition” and “Love Lost” generating happy madness from the crowd. But more of my excitement stemmed from the openers Oberhofer, a bunch of moppy-haired, unassuming indie rock lads picked up by the music blogosphere and gearing up to play Coachella next month. With short, sweet and simple lyrics from songs like “Away Frm U” and “Gold,” I felt like a teenager in love. ~ Desiree Gamotin

Whew, we’re all tapped out from Canadian Music Week and ready to take a break from concert marathons. At least until North By Northeast, that is.