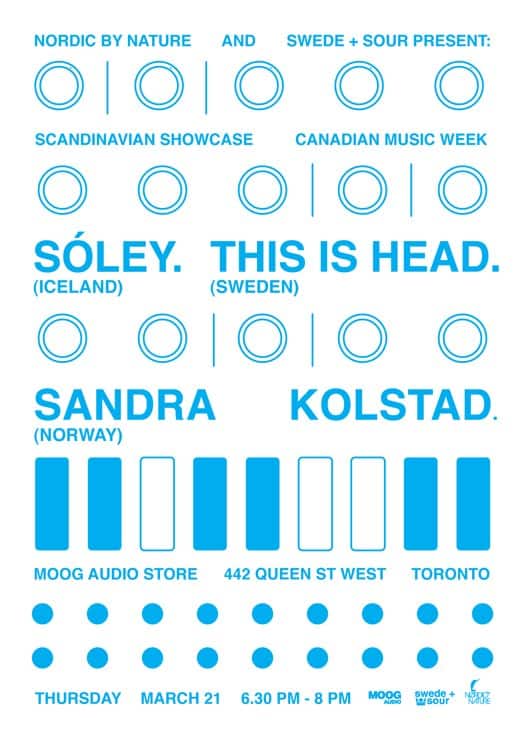 Confession: I am in love with Scandinavia. Everything that comes out of those countries is somehow cooler than everything else—from the fashion, to the art, to, of course, the music. (And we’re not the only ones who love Scandinavian countries!)

So, we’re really excited to announce that we’re partnering with awesome blogs Nordic By Nature and Swede and Sour to bring you a very special CMW showcase featuring three amazing Scandinavian artists! Taking place this Thursday, March 20 at Moog Audio (442 Queen St. W.), the Scandinavian Showcase will introduce you to some of the most exciting up-and-coming Scandinavian acts.

Everything kicks off at 6:30pm and is FREE OF CHARGE! Here’s who you’ll be serenaded by:

This multi-instrumentalist from Iceland has a lovely and approachable voice that she backs with an almost whimsical piano sound. It’s the kind of music that creeps up on you—it builds until you’re almost swimming in it.

Thanks to acts like Lykke Li and Niki and the Dove, it’s no secret that Scandinavia’s got a good pop music thing going—and Sandra Kolstad’s no exception. The Norwegian pianist’s music is catchy, energetic, and interesting; just try not to dance.

This is Head is four guys (Adam, Tom, Henric, and Björn) from Sweden who produce a fresh take on indie rock: it’s all guitar, harmony, and beat. Plus, they say that their instruments seem to have friendships with each other that we humans can’t understand. SpooOOooky.

We heart Scandinavia. See you on Thursday!