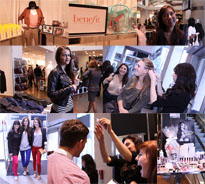 Hundreds of fashionable ladies gathered at Gap on Bloor Street last night for our #CinematicStyle shopping event and gift lounge. If there was any doubt about fall’s biggest fashion trend, it was clearly defined last night: Primary coloured pants and striped jail-bird chic.

Upon arrival, guests were treated to makeup touch-ups at the Benefit beauty bar and feather hair extensions from Queen West’s Doll Bar, which proved so popular that we ran out of feathers! BFFs, like @estherjgarnick and @vbower got matching feathers. #Awww

Shoppers loved the new Gap denim in navy leopard print and electric yellow top and mixed these trendy pieces with much loved staples for the cooler weather ahead. Our favourite was definitely the cord leggings and black leather jacket for $326.00. Guests who spent $75 and more rode the escalator up and were invited into a KICKASS gift lounge to fill an exclusive Gap tote with gifts from John Frieda, Jergens, Sony Music Canada, Sally Hansen (those Salon effects polish strips we LOVE), vitaminwater and Benefit makeup. Though there were several artists up for grabs, it was the new Foster The People album that received the most, “Yay! I so wanted this!” response.

But that’s not all! Downstairs, we intermittently hijacked Dan’s DJ booth to announce contest winners. And with Lomography‘s Diana Mini Rose cameras and an enormous Benefit Gift Basket up for grabs, it was a hot draw. Although the scene was mostly twenty-somethings, we were so delighted when the two cutest Punky Brewster grade eight students won the big Benefit gift pack. Having also got their hair feathered, we think it might have been their best night ever. It was the cutest…and we loved their style.

The best part of the night? When some guy came running in to frantically ask, “IS MADONNA HERE?!!!” Yeah, no. We wish, but were more than happy that all of you could make it.

Lastly, to the girl on Twitter, @inastral, who tweeted this:
@shedoesthecity #CinematicStyle Ha, I fail at life: $74.29total=>ran to get socks, during which=>outta giftbags. Still! AMAZING deals & event!

We are going to make it up to you. And hope you have some amazing socks.