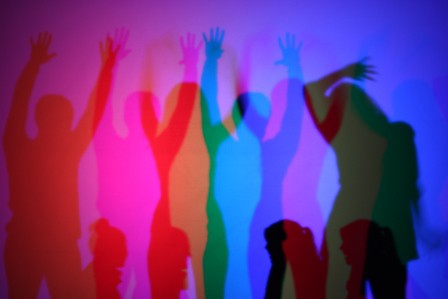 Nuit Blanche – now a Toronto institution – is our annual city-wide celebration of contemporary art. This Saturday night, from sunset to sunrise, the familiar is discarded and Toronto’s public places are transformed into an artistic wonderland.

This year, the event is divided into 4 exhibit themes (which feature 90 installations) and placed in four distinct areas for your walking convenience. Plan your route:

You should DEFINITELY hit up the following:

“October Sky” by Paul-André Fortier – Montréal, Canada (Waterfront)
October sky is a choreographic performance in a large glass box at Harbourfront Centre. It will be performed by a group of dancers from the School of Toronto Dance Theatre and feature two soloists from Montreal, Lucie Vigneault and Mark Medrano.

“Ascension” by Julie C. Fortier – Rennes, France (Waterfront)
Julie C. Fortier proposes an olfactory landscape of the Toronto sky, offering the visitor an experience of evocative scents. Fabricated from molecules associated with a palette of colours passing from black, to grey, to pink and finally to white, the fragrances created by the artist will be diffused along a waterfront urban passage. They will experience the suggestive power of the scents, including the deep smell of burning, tar, leather, incense, associated with black; the grey odours of ozone, smog and fog; the fresh herbal fragrances, dewdrops and power, for pink; and finally the fluffy, vaporous and luminous smells related to the colour white. In this nocturnal journey, the visitor will transport the scents into the city, bringing them elsewhere like the messenger of a subtle form of public art.

“Waiting, 2015” by Erwin Olaf – Amsterdam, The Netherlands (John St.)
Erwin Olaf’s multimedia installation Waiting draws on the shapes and shadows of film noir to capture the tension and creeping discomfort one feels when waiting for someone who never arrives. For this showing, two short films shot in black and white document the behaviour of a woman as she waits. Screened simultaneously, the films will be accompanied by a haunting elemental piano score composed by Sebastiaan Roestenburg, played live.

“Electrosmog Toronto” by Jean-Pierre Aubé – Montréal, Canada (Waterfront)
Equipped with multiple radios, antennae and network computers, Jean-Pierre Aubé and his team of performers scan the sky. They will collect, document and record radiofrequencies, revealing thousands of emissions from personal communications systems, security, commercial beacons and satellites. Their interventions will provide the audience with means of grasping the electronic smog that envelops the city, making it perceptible by using the sounds and images generated by the spectrum.

“OCEAN” by Philip Beesley – Toronto, Canada (City Hall, Inside)
Ocean will create a turbulent primal environment in the Rotunda of City Hall. A constantly changing canopy of recycled textiles induces vast, unstable forces where brilliant bursts of light alternate with dark, surging movements and intense waves of hypnotic sound. A chorus of cries and whispers echoes within rising waves.

“Death of the Sun, 2016” by Director X – Toronto, Canada (Nathan Philips Square)
An immersive experience where the observer will witness a massive sculpture of the sun as it progresses through its life cycle. A deeply personal and highly evocative meditation on human mortality and people’s individual place in the universe, this installation portrays the death of the star that sustains this planet.

“PNEUMA” by Floria Sigismundi – Los Angeles, USA (Nathan Philips Square)
Pneuma (“breath of life”) is a meditative consideration of the transformations that define human existence. Using the rhythmic medium of film, Pneuma represents a personal translation of inner thought. “It bloomed,” says Sigismondi, “from a walking dream that unlocked something boundless and idyllic from my unconscious.”

“Inuit Knowledge & Climate Change“ by Zacharias Kunuk – Igloolik, Nunavut & Dr. Ian Mauro, Co-Director – Winnipeg, Canada (Waterfront)
Inuit Knowledge and Climate Change, the world’s first Inuktitut language film regarding climate change and involving Inuit communities, is projected on a large custom-built screen by the shore of Lake Ontario, close to the Toronto Terminal. Their stories are about the past, the present, extinction, survival and the need for a balance between the human presence and nature.

“Eunoia II” by Lisa Park – New York, USA (Bay St.)
This installation uses commercial brainwave headsets to create an audio-visualization of the performers. During the night, audiences are invited to participate and once in concentration mode, their emotional “data,” picked up by the headset, gets translated into sound waves that create vibrations in the pools of water placed atop speakers. The Emotiv headset continually transmits data while monitoring brain activity (alpha, beta, delta, gamma and theta), emotional states (excitement, engagement, meditation and frustration), facial expressions (wink, raised or furrowed eyebrows, clenched jaw and smirk) and cognitive activity.

“Literature vs. Traffic, 2010” by Luzinterruptus – Madrid, Spain (Bay St.)
This interactive light installation will transform a street that is normally allocated for vehicles into a river of books overflowing in a symbolic gesture. The donated books will become the conqueror of public space with traffic yielding to the modest power of the written words. During the last few hours of the night, these books of diverse topics can be claimed by anyone who wants to take them, signifying that the installation will recycle itself. In the end, the cars will return to occupy the street, but for many, the books they bring home and the memory of the transformation will change their relationship with the street.