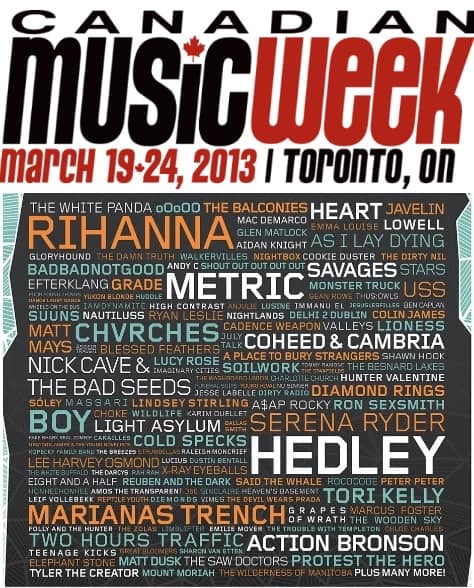 If you’ve spent the past week-and-a-half with a serious case of festival envy thanks to all those SXSW-ers, not to worry: there’s a big dose of music coming your way. Canadian Music Fest kicks off tomorrow and brings with it six days of must-see performances, DJ sets, 4am last calls, and lack of sleep. To help you navigate CMF’s massive list of shows, here’s our top picks for the week. Check out the CMF website for a full list of shows and ticket info.

8pm Rihanna and A$AP Rocky @ Air Canada Centre, 40 Bay St. Say what you will about Rihanna’s personal life, but the woman knows how to sing and perform. Joining her on tour is A$AP Rocky, who has received plenty of buzz thanks to hits like “Goldie” and “Purple Swag.” VIP wristbands only.

9pm Raekwon @ Sound Academy, 11 Polson St. Wu-Tang Clan’s Raekwon is legendary, which means this will be a night to remember. Limited wristbands/passes accepted.

6:30pm Nordic By Nature & Swede + Sour Present: Scandinavian Showcase @ Moog Audio, 442 Queen St. W. We’re so excited to be collaborating with Nordic By Nature and Swede and Sour for this stunning Scandinavian showcase! Performances include Iceland’s Sóley (who I saw in November with Of Monsters & Men), Norway’s Sandra Kolstad, and Sweden’s This Is Head.

7:30pm Heart @ Massey Hall, 178 Victoria St. I will forever be Crazy On You, Heart! These women are rock goddesses—’nuff said.

8pm Wildlife @ The Great Hall, 1087 Queen St. W. Toronto rockers Wildlife released their sophomore album …On The Heart earlier this month, and I predict big things in their future. Joining them are Mo Kenney, Mad Ones, PS I Love You, Heritage Centre, and a secret guest. All wristbands accepted.

8:30pm Audio Blood Showcase @ The Dakota Tavern, 249 Ossington Ave. Audio Blood knows good music and their showcase will feature performers hailing from across our beautiful country: Cai.ro, Miesha and the Spanks, Acres of Lions, The Mohawk Lodge, Amos The Transparent, and The Town Heroes. All wristbands accepted.

11:30pm Pop Montreal Showcase @ The Drake Underground, 1150 Queen St. W. Montreal has birthed some amazing musicians, so you can bet on this showcase being a good one. Performances include UN, Ain’t No Love, Karneef + the Life, and Lexis (Music is My Sanctuary). All wristbands accepted.

7:30pm M for Montreal Showcase @ Sneaky Dee’s, 431 College St. Mac Demarco is the kind of musician that steals girls’ hearts because he’s that good musically (and also has an adorable gap in his front teeth). Joining him are fellow Quebec-ers We Are Wolves, Ponctuation, Peter Peter, and Misteur Valaire, plus Toronto’s Grounders and Brews Willis (COOL NAME, no?). Limited wristbands/passes accepted.

7:30pm Filter Magazine Showcase @ The Garrison, 1197 Dundas St. W. This showcase is a mixed bag of genres and bands from around the world: San Jose’s The Great Wilderness, Montreal’s First You Get The Sugar, Toronto’s Rikers, Sweden’s This Is Head, Ireland’s Funeral Suits, and a secret guest at 1am! All wristbands accepted.

8:30pm SiriusXM Indies After Party @ Wrongbar, 1279 Queen St. W. You can bet on things getting real sweaty at the Indies After Party! Featuring performances by Coleman Hell, Plaster, Digits, Dirty Radio, Nightbox, and a DJ set by Diamond Rings. All wristbands accepted.

11:30am The Aussie BBQ @ The Horseshoe Tavern, 370 Queen St. W. Skip brunch and head to the Horseshoe for a BBQ and Australian bands! The Aussie BBQ is always a good time and this year, Sounds Australia presents the Blackchords, Jackson Firebird, The Beards, Strangers, The Trouble With Templeton, Grey Ghost, Seth Sentry, The Good Ship, and Vaudeville Smash. All wristbands accepted.

8pm CMF Showcase @ The Horseshoe Tavern, 370 Queen St. W. If you haven’t seen BadBadNotGood yet, get on it! The trio performs jazz-influenced interpretations of hip-hop tracks and have collaborated with Tyler, The Creator and Frank Ocean. Joining them are Windsor’s Walkervilles, Vancouver’s No Sinner, Victoria’s Aidan Knight, Toronto’s Cookie Duster, Edmonton’s Shout Out Out Out Out, and Hamilton’s The Dirty Nil. Limited wristbands accepted.

8:30pm The Buzz Factor Series @ Lee’s Palace, 529 Bloor St. W. If you love a good rock ‘n’ roll show, this one is a must. Performances by Toronto’s Decades, Montreal’s Valleys, Toronto’s Lioness, England’s Savages, and Montreal’s Suuns. All wristbands accepted.

10pm Mac Demarco @ The Shop under Parts & Labour, 1566 Queen St. W. For those who can’t make it to (or get enough of) Mac Demarco’s show at Sneak’s on Friday, there’s another opportunity to check him out on Saturday. He’ll be joined by Pink Wine, The Lost Babies, and Cousins. All wristbands accepted.