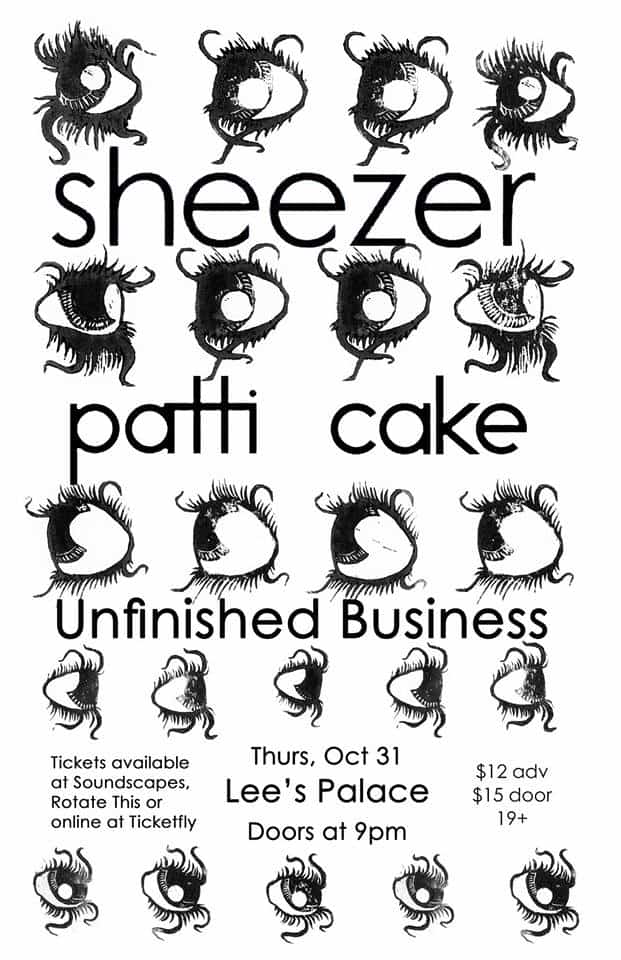 Halloween is fast approaching – have you noticed? Something to do with the hundreds of invites flooding your phone and Facebook? Everyone wants to celebrate All Hallow’s in their own way, and finding the right plans can be difficult. Two questions: are you into dancing your face off at a rock concert? How about singing Weezer songs at the top of your lungs? If you’ve answered yes to either of these questions, I may have found the perfect thing for you. For the last three years, Sheezer has raised hell at Lee’s Palace with their annual Halloween show… I don’t really need to tell you who Sheezer is, do I? The all-girl Weezer cover band? COME ON.

These girls really rock. Members of Sheezer are key parts of Our Lady Peace , The Bicycles, and By Divine Right. Together, they’ve received massive attention with their renditions of 1990’s Weezer albums. Their popularity first exploded when Weezer’s lead singer Rivers Cuomo tweeted about the band. Excitement spread through the net, and quickly became news in Spinner, USA Today, Exclaim, CBC, and hundreds of music blogs. Since their first show in 2010, they’ve gained a loyal following, and played sold-out shows all across North America.

Here three reasons why you’ll want to be at this Halloween night of debauchery:

Girls Rock Camp alumni Unfinished Business will open up the night. These young ladies have quickly learned the craft of creating catchy pop-punk tunes, making them Fucked Up’s favourite new band. Patti Cake, the 60’s girl group meets 90’s grrrl group, will go on next. They’ve been called “pretty much the most fun live band in Toronto” by Now Magazine. All this plus the awesomeness of Sheezer.

Picture a sweaty audience of zombies, ghosts, and, let’s be real, probably some Mileys, all tangled up in a messy mosh pit. In the last few years Sheezer has transformed themselves into Sailor Moon, the Spice Girls, and KISS. We’re sure this Halloween they’ll totally surprise us with something hilarious.

Last year, this show broke the record for the longest crowd surf, an achievement previously held by the Foo Fighters. That, my friends, is impressive.

Now that you’re all caught up, who’s in? The show will go down Halloween night at Lee’s Palace. Tickets are $12 advance from Rotate This, Soundscapes and Ticketfly or $15 at the door.