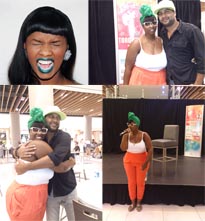 “If you can’t speak in love then I can’t understand what you’re saying,” sang Shi to the Urban Eatery from her first single “LoveSpeak” on her recent EP “LVSPK”.

Shi’s message of love is already speaking volumes to audiences around the world. Having begun her music career just two years ago, Shi is making lasting impressions as she blazes her own trail. Experimenting with a combination of jazz, soul, R&B and hip hop, the Toronto-based songstress has created a new version of soul, giving new life to nostalgia in music.

With influences including musical legends Prince, Stevie Wonder, and Billie Holiday, it’s clear that Shi’s creative approach to her music appeals to people of all ages.

“My music is about connecting with the audience through honesty in my lyrics,” says Shi. “It’s about being true so people can relate.”

And relate they did. With her bright eyes beaming behind trademark oversized eyeglass frames, Shi belted out her bold lyrics to spectators. Once she finished her riveting performance, Shi was immediately swarmed by adoring fans, including kids, teens, and parents who were dining at the Urban Eatery. Shi’s supportive family was also in the house to cheer for their beloved rising star.

I had a chance to speak with Shi after she blew everyone away as the first performer to rock TEC’s Urban Mic stage. The first thing she told me is that she is a passionate songwriter, which is evident in the mature subjects  addressed in her lyrics. A level 8 classically-trained pianist from the Royal Conservatory of Music, Shi’s songwriting compliments her deep understanding of classical music.

Shi’s first writing accolade was with Toronto’s own Drizzy Drake for the UK chart-topping song “R.I.P. (I’m Ready For Ya)”, appearing on British Recording artist Rita Ora’s debut album. Since then Shi has made a name for herself through her own music including self-titled “The Shi Wisdom Mixtape” circa 2007.

Shi’s LoveSpeak video is a must-see feel-good ditty. Released just last year it has rapidly made its way around the world. It’s easy to appreciate that Shi has been compared to distinguished artists Bilal, Muhsinah, and the late Amy Winehouse.

“Shi has sparked the community’s attention to Urban Mic, which sets to give emerging local artists exposure and a unique opportunity to perform for new audiences,” said Devo. “I look forward to seeing the Urban Mic expand as people spread the word and encourage their friends to check it out.”

Devo will host the Urban Mic each Thursday at 6 pm in TEC’s Urban Eatery until Oct. 12. For more information, visit tecurbanmic.com .