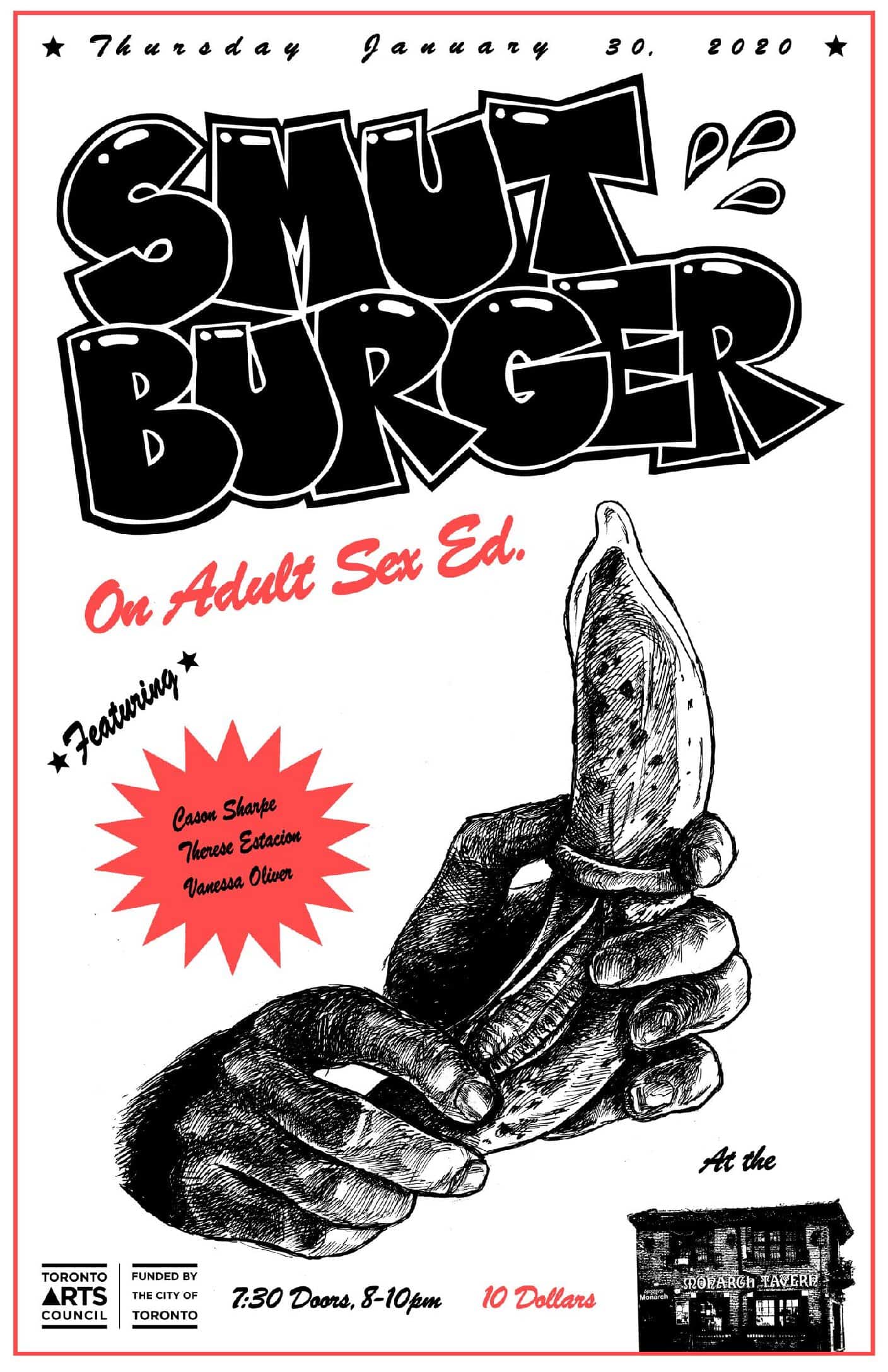 Smutburger is a multi-generational and cross-discipline event that welcomes all to re-examine sex: looking back at what we learned in high school to addressing how we continue to educate ourselves—and talk about sex—today.

As described on eventbrite, the evening will focus on “the question of adult sex, and what it might mean in the continuous fluctuation of sexual tastes and preferences for our ongoing sexual development”—never stop learning!

Expect a juicy and smart panel discussion moderated by bonafide smut writers Courtney Toderash and Tamara Faith Berger, with a “subverted Q&A to follow”. There’s no need to put your carefully folded secret sex question in a box; anything you once feared sharing is up for discussion.

Intrigued, we caught up with Berger, to find out what inspired this evening, how she first learned about sex, and what complex themes this night hopes to explore.

SDTC: What was the catalyst that inspired this event?
Tamara Faith Berger: Smutburger was originally a publishing idea: to release smut into the world that disrupted the classic erotica landscape with quick and dirty artist-authored missives. This speaking series is one manifestation of Smutburger that I have created with my colleague Courtney Toderash (who, as it happens, writes really good smut!) We have three Smutburger evenings planned, all inspired by the idea that sexual discourse should be public, a little messy and thought-provoking. We’re imagining these events as a mix of consciousness-raising and town hall. Ultimately, we want to be thinking through this stuff together.
What do you remember learning in sex-ed? Do you have any particular vivid memory?
I remember learning more about sex at home than at school. At home, when I was very young, I remember being told that the rainbow pills in the plastic disc that I found were plant food. I also happily read The Joy of Sex, Playboy and What’s Happening to Me? in domestic seclusion. In public school, all I recall was watching documentaries made by the government that used a lot of scare tactics around teen pregnancy. I truly draw a blank  when it comes to anything positive about my formal sexual education all the way through high school.  I also grew up in a time before the word consent was attached to sex, so maybe that is significant.
How do you think most adults learn about sex?
Apparently, a lot of women learned new sexual things from Fifty Shades of Grey. I’m not convinced. I think it’s more likely that we learn things through lovers and/or active imaginations; through pornography, sex workers and definitely from reading. I took a great workshop recently on The Wheel of Consent with Lori Johnston which was very experiential. Lori kept saying, we have to stop talking, we need to take this work into practice! I think that adult sex ed, in whatever form it takes, wants to trespass set notions about sex that we may have on lockdown. Sometimes there’s a lot of ice to crack through.
What is the format of the evening?
Courtney and I have invited three guests from different disciplines to each make ten minute presentations on the topic at hand. On Thursday, we are featuring Vanessa Oliver, a Laurier professor whose work focuses on sex ed, Cason Sharpe, a writer who has dealt with queer teenage sexuality in his work, and Therese Estacion, a teacher in the Catholic School Board and a poet. We are privileging discussion on stage between our guests as well as a kind of ‘subverted’ audience Q and A where we are making space for people to question, share experiences, and air their concerns. We want Smutburger to be provocative and intimate in equal measure.
What’s an interesting thing you’ve learned about sex lately?
That the binary way of seeing sex and gender is in epistemological crisis! Paul B. Preciado, a “dissident of the sex-gender system,” just had a book launch for his newly released An Apartment on Uranus: Chronicles of the Crossing at Glad Day Books.It was amazing. I highly recommend Preciado’s Testo Junkie, too.
What’s the best sex lesson you ever learned?
I come right back to the consent workshop where my takeaway was that one can truly take pleasure for oneself on a willing participant. It might feel a little creepy at first, but a consenting person can give that ‘gift’ of themself to you without simply lying there and enduring your machinations. This so-called selfish way of taking pleasure has historically been ruined by rapists and creeps, when in actuality taking pleasure from someone else (and only thinking about yourself!) is a totally valid and exploratory part of sex.
Sex is never just sex. What other themes will your night explore?
Shame, guilt and perversion hopefully! I’d also like to get to buried sex curriculums and what happened at St. Mike’s.
Smutburger is happening Thursday, January 30th, 7:30-10pm at Monarch Tavern. Tickets are $7-10 in advance, or you can grab at the door for $10.
Tags: Consent, Fifty Shades of Grey, Playboy, Sex, sex ed, Tamara Faith Berger, The Joy of Sex