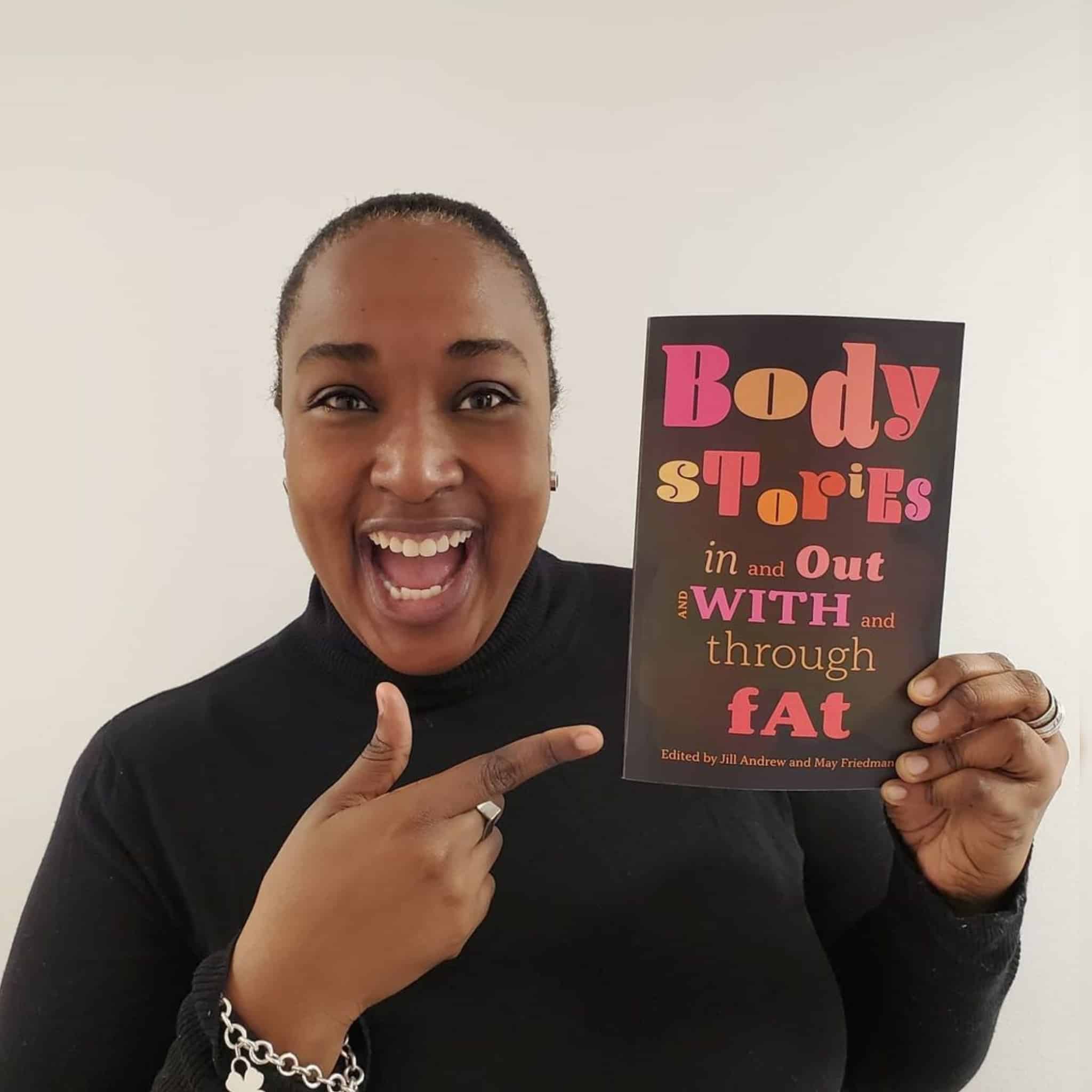 If you’ve watched MPP Jill Andrew in action at Queen’s Park, you know that she’s a force who fearlessly stands up for what she believes in, and constantly uses her voice to push for basic human rights like paid sick leave and affordable housing. Watching her speak is as riveting as any scene in an Oscar-nominated film. Jill is what a politician should be! But that’s just one side of her.
Activism and compassion—on the streets and in her community—are what led Jill to parliament. She’s a do-er, not a say-er. She’s always been an influential voice for LGBTQ rights, Black Lives Matter and has been a leader in the body positive movement before the term was widely recognized.
She Co-Founded Body Confidence Canada with her partner Aisha Fairclough, which now hosts the annual Body Confidence Canada Awards. Through their work, her and Aisha launched the #SizeismSUCKS campaign, that is advocating to have size and weight added to the Ontario Human Rights Code as prohibited grounds for discrimination. Jill is also the co-editor of Body Stories: In and Out, With and Through Fat, a new collection of essays (co-edited by May Friedman) from Demeter Press that share what it’s like to live in a fat-hating world.
When Jill reached out to us to see if we’d be interested in sponsoring the launch event for Body Stories, it was an instant YES. We’re proud to partner with Another Story Bookshop and Ryerson’s Unifor National Chair in Social Justice and Democracy, to celebrate the book, and all the brave contributors and stories in it.
In advance of the event this Sunday, we connected with one of our greatest mentors to ask her some things.
What compelled you to start gathering narratives for Body Stories? Was there a moment when the idea came to you? Or was it something you wanted to do for a long time?
I have had a complicated relationship with my body. From my personal health issues and experiences I had while being hospitalized, to the usual unsolicited reading of my body that came from loved ones (ie. “well-meaning” family members) and strangers on the street, I began to learn very early on that people thought there was an open invitation to provide advice on how I should look, carry myself, dress, or what I should and shouldn’t eat.
I also learned very early on that according to how I played into those expectations (or not!) that there were moral judgements about my character, my ability (even intellect), and my ‘femininity’.
I had my own love/hate relationship with my body and I sincerely wondered if anyone else was dealing with similar feelings. Between all of this, and a trip to the theatre one day where I saw, The Adventures of a A Black Girl In Search of God…well, the rest was history—as they say. 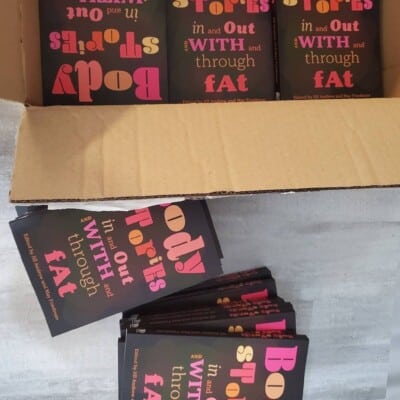 What, in your opinion, is the biggest shift that needs to happen in society, regarding fatness?
Society needs to STOP BLAMING people for their body size, weight or shape. We do not blame people for the colour of their hair, their shoe size or their height, yet there’s an assumption that people’s weight is something that they can design by themselves. It is simply not true.
While we may be able to have some influence over our body size/weight temporarily, we must recognize that our bodies have their own internal mechanism that is very much influenced by our biology, and genetics.
Society MUST stop equating fatness with immediate unhealthiness, greed, laziness and all the other misinformed ideas society associates with body weight, size and shape. The reality is yo-yo dieting and excessive weight loss especially over short periods of time has been much more associated with heart disease and death than fatness.
Body Stories is a collection of narratives that share what it’s like to live in a fat-hating world. When you read all the submissions, what was the common theme that stuck out for you? Or maybe a feeling that surfaced?
A common theme: we can speak for ourselves and our bodies, our stories are ours to show and tell. All too often fatness is talked about through the lens of researchers, doctors, those who are ‘warning’ us against becoming fat; this collection represents a group of people who aren’t combatting fatness, they aren’t embracing fatness, they aren’t hating fatness, they aren’t running away from it, they aren’t trying to solve it and they aren’t shying away from it, they are simply being—being in their bodies and taking us along for the ride exploring how they live ‘in and out and with and through fat.’ Some narratives are more complex than others, some have ‘endings’ others don’t. It’s like life, right? No two stories are the same.
How do you move around the world today that is different to how you moved around the world 10 or 20 years ago?
A big part of me doesn’t give a ____! 10-20 years ago, perceptions of me REALLY mattered. Today, while I still care what people think, as long as I know I’m standing in my truth and being as authentic as I can be I can take on anything or anyone. Also, while I am still my harshest critic, I know now more than ever that systemic barriers exist. Achievement, no matter how hard you try on your own, is influenced by many factors. Some of these you may be totally oblivious to but it doesn’t mean they aren’t still relevant and don’t still impact how we engage the world and how it responds to us. My fatness, Blackness and my womanhood are read together…they are inextricably linked. I wouldn’t want to be ANYONE but who I am and I wouldn’t want to look or be any differently than I am. I’m not perfect, I’m just me – Jill and it’s good enough.
What was the biggest lesson you learned from creating Body Stories that will always live with you?
Never give up. There were many times I hid from this project. In some ridiculous way I had moments of not feeling ‘worthy enough’ to carry my contributors stories, to bring these to fruition. Life also happened throughout the loooooong gestation of this project (almost 2 decades came around!). There were MANY TIMES I got knocked down, questioned myself, my own relationship with my body and my place in this world… but it also appeared that at every turn when I thought I might abandon the anthology someone would come into my life OR some thing would happen and it would bring me back squarely to Body Stories with an even stronger desire to bring this anthology to life. My co-editor May Friedman and our publisher Demeter Press were truly instrumental. This day – our book launch – could never have happened without them! 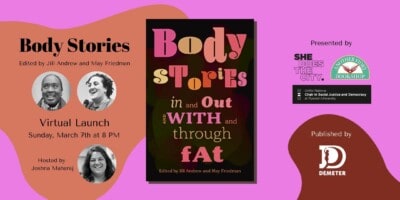 Why was it important for you to time the launch celebration to International Woman’s Day (although it’s on the eve, not the actual day)?
We are consistently being told either explicitly or covertly NOT to take up space. On IWD, and frankly every day, we want to strive to be boundless, to be unapologetic and to take UP our space, whether that’s our bodies, our voices, our ideas and thoughts, our leadership, our communities, loved ones…lovers.
We are here because so many came before us and lead the way. We aren’t going anywhere. As an educator, body image advocate, a fat activist, Black queer feminist or as a politician my position stands: We ARE here…and we aren’t going anywhere!  IWD seems like a perfect day of significance to reflect on what that means and how these feelings can be translated to an empowered, liberating and self-actualizing way to think about our bodies and move in them in the ‘worlds’ we call our communities.What do you want to say to the person who is struggling to love themselves right now? Who feels ashamed by their size?
We all have these days. Co-editing this anthology doesn’t cure me from that. What I want folks to know is that your journey of building a relationship with your body is your journey. Only you know your timelines. Also remember loving ourselves isn’t a constant state of being. That wouldn’t be realistic. It’s okay to be at different places on the spectrum… loving, hating, not liking, feeling pretty neutral. If you are a person who hates their bodies today, please do not hate yourself for these feelings. Recognize that you didn’t create them on your own.
When we are able to recognize the toxic information we receive – knowingly or not – about our bodies and where that information originates from (i.e. loved ones, workplaces, schools, media, culture, healthcare, beauty industry, heterosexual and Eurocentric beauty ideals… you name it…) then we are able to tackle them. The work doesn’t have to happen alone… it happens when you surround yourself with a network of supports: folks who aren’t going to engage in negative body talk but will be there to gently nudge you in the right direction when you’re slipping, and you will do the same for them too.
Register now to join us at the #BodyStoriesTO launch this Sunday at 8PM. Follow Jill at @JillsLastWord on IG & Twitter.