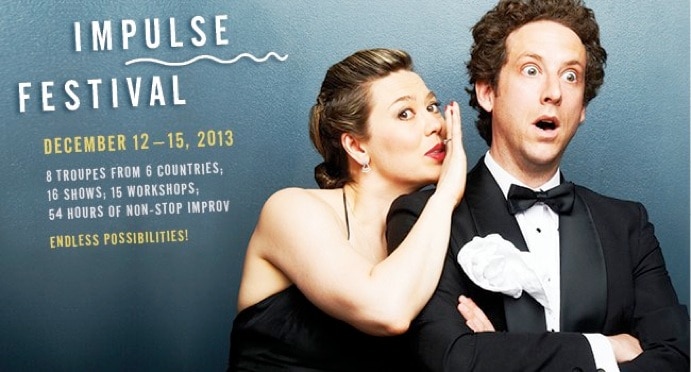 Looking for laughs this week? Look no further than the Impulse Festival, a showcase of improv acts from all over the world! Co-produced by The National Theatre of the World and Soulpepper Theatre Company, the inaugural Impulse Festival has sixteen shows, fifteen workshops and 55 hours of nonstop improv, so it’d be hard not find at least something to your liking.

SDTC had a chance to ask Naomi Snieckus, one half of The National Theatre of the World, about the upcoming festival and her experience as a professional improviser. A graduate of the Ryerson Theatre School and alumni of the Second City, Naomi won a Canadian Comedy award for best female improviser in 2010 and was recently nominated for an ACTRA award for her work on CBC’s Mr.D.

Shedoethecity: When did you start doing improv? What drew you to it?
Naomi Snieckus: I started pursuing it seriously in Vancouver 10 years ago…ish? I always loved the magic and surprise of improv. Having to think on your feet and create something before an audience is incredibly challenging but also entirely rewarding. I grew up watching SCTV and then when I was at Ryerson Theatre School I would go to the free improv sets at Second City as much as I could. Improv is just exciting for audience and performer–there’s a sense of “we’re in this together”!

SDTC: In addition to your work with NTOW, you are an actor, writer, voiceover artist, and director (!). How does your improv work differ from these other roles?
NS: Well, with our improv shows I don’t need to memorize lines…and I get to wear whatever I want…plus there’s NO craft service unless I bring it myself! Having improv skills keeps me ready for anything on set which makes me stay really present and in the moment.”

SDTC: With the National Theatre of the World you primarily improvise with your partner, Matt Baram. Can you talk a bit about balancing an artistic/professional and romantic relationship?
NS: It’s usually fun but a lot of our dates turn into meetings so sometimes we have to say: ‘no work dinner’. I feel pretty lucky to share home and stage with a guy like Matt – we have a lot of laughs in our life and we also have similar work ethics and drive.

SDTC: Can you tell us a bit about how the festival came to be?
NS: We were doing Script Tease at Theatre Passe Muraille which was our first home with NTOW. Albert Schultz and Leslie Lester came to see a show and invited us to do some of their festivals–that worked into a longer residency. They are big thinkers and dreamers so we had a meeting and Albert said, ‘Write down your top ten things you want to do’. At the top of the list Matt wrote ‘International Improv Festival’. We had been travelling all over the world with NTOW and met so many inspiring performers – we wanted to introduce them to the Toronto community. It’s entirely remarkable that we are able to bring this many international performers here – we are lucky to be in partnership with Soulpepper–it feels like the sky is the limit with them!

SDTC: Wow, what a fantastic chance to bring improv to a more traditional theatre audience! Speaking of, what can festival goers expect to see on stage?
NS: Well, unlike a traditional theatre show–anything can happen. Possible gunfire, possible nudity, possible strobe lights…anything is possible. That’s what makes improv so exciting. In regular theatre when something surprising happens like an actor forgets their lines or breaks a prop the audience leans forward. On an improv stage there’s always something surprising – and it will only happen one night. It makes each show very special.

SDTC: And who are the performers involved in this first year of the fest?
NS: They are the top improvisers from all over the world–it’s a once in a lifetime opportunity to see shows and take workshops with these people! Matt and I have worked with these performers in various places in the world – we’re really excited to share them with Toronto. Plus folks like Colin Mochrie, Linda Kash, Sean Cullen are coming to play in the 55hr Soap-a-thon…it’s going to be wild!

SDTC: The Soap-a-thon–that’s 55 straight hours of improv! You’re attempting to perform the world’s longest improvised soap opera… How will you prepare for it? Have you ever done anything like this before?
NS: I don’t think you can prepare for it. Luckily we have veterans Mark Meer, Dana Anderson, Jacob Banigan, and from the UK Sean Mccan, Adam Meggido – they know what to do.

At Second City I organized a 24hr marathon -but that was ONE day…this is two and a bit! Crazy. I know.”

SDTC: As you mentioned, the Impulse Festival has a workshop component to it- lots of people find improvising, even just speaking in front of a group, intimidating. Any advice for would-be performers?
NS: Yes, the workshops are great–get exposed to as much improv from as many people as possible. Get in front of audiences as much as possible and then give yourself notes. Never write off a show- there’s always something good to recognize and be victorious about like “that was a great character” or “I made a good offer”. But make sure you learn from your shows and you don’t just forget about them.

Thanks for your time Naomi! Now go get some rest… you’re going to need it!

The Impulse Festival runs December 12 to 15 at Soulpepper Theatre. Show tickets range from $15 to $20, while the 55 Hour Improv-a-thon is by donation with all proceeds going to Gilda’s Club Greater Toronto. Improv workshops are being held for all levels of experience throughout the festival! A few SDTC troupe picks: Gordon’s Big Bald Head, Die Gorillas, and of course The National Theatre of the World!

“It’s a cinematic, musical, emotional journey and I am so proud to be a part of it!”: Legendary Jackie Richardson on The Musical Stage Company’s ‘Uncovered’ Virtual Concert

Book a curbside Tapestry Opera ‘Box Concert’ performance for your friends and neighbours!