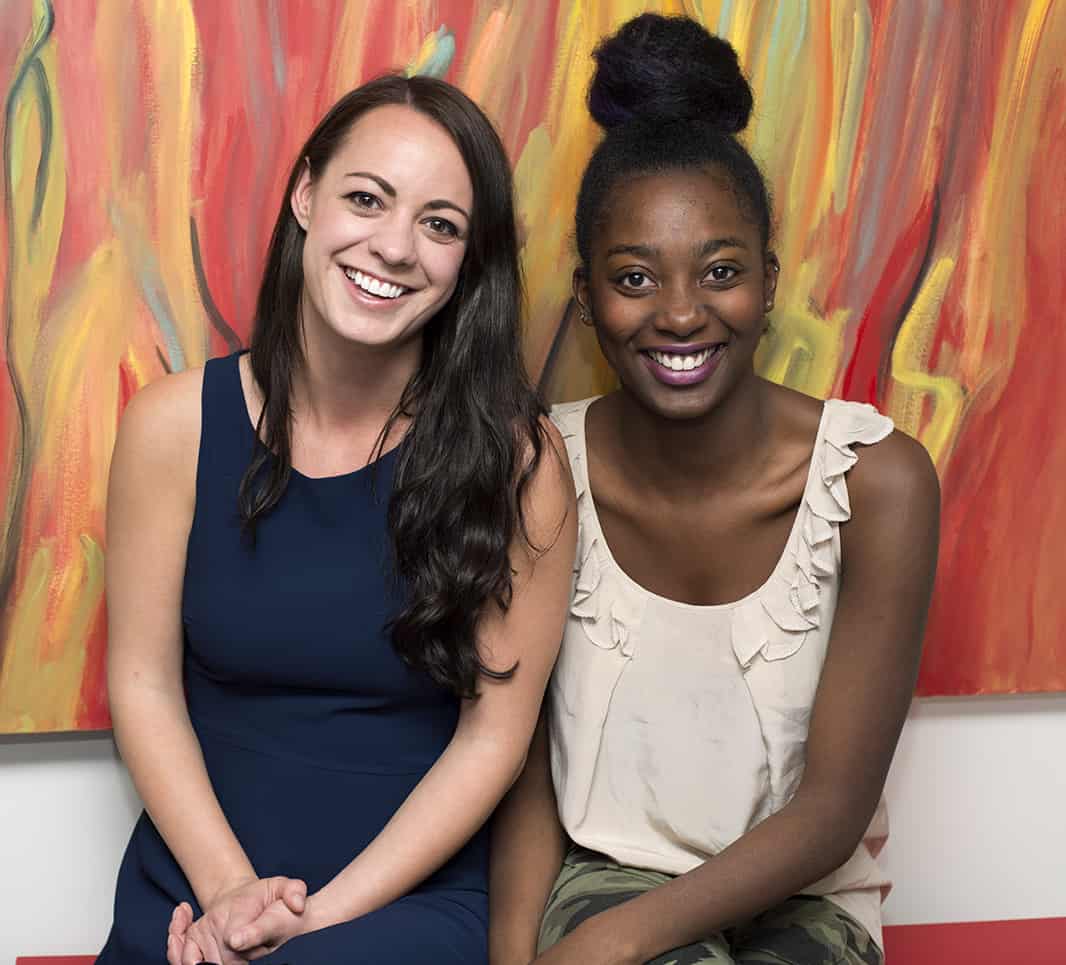 Elizabeth Melanson (L) and Mouna Traore (R) are the creative forces behind The Mni Films, an independant film production company based in Toronto. Their first short film, “All of Me” will have its Toronto premiere Thursday November 13, 2014 as part of the Toronto International Short Film Festival happening at Carlton Theatre. Photo by Solana Cain

Stories To Tell: All of Me at TISFF

Butterflies will be fluttering Thursday night when Mouna Traoré and Elizabeth Melanson present their first short film as part of the Toronto International Short Film Festival.

“I’m definitely excited but nervous,” says Melanson, 25, who has already had a chance to see the film screened at the California Independent Film Festival where it was nominated for Best Mini Short at the Slate Awards.

“It was a surreal experience, “ recalls Melanson. “But Toronto is where we made the film and where everyone is going to come and see it.”

“I’m excited to be around my peers and so many people that I know and admire watching it but I’m scared… it’s going to be out there,” said Traoré, also 25.

All of Me revolves around a young man who realizes his lover does not want a monogamous relationship and so he invites his ex-girlfriend into the equation in hopes of finding balance.

The nine-minute film is the first to be released from The Mini Films, an independent film production company birthed last spring by Traoré and Melanson.

“I was having a tough year,” said Traoré.

“I was auditioning a lot and coming really close to a lot of parts but not booking them. I really wanted to show something of myself and put effort into making work for myself,” she said.

Unbeknownst to her, across the country Melanson shared her feelings.

“My acting career was not going the way I had hoped it would in Vancouver. I wasn’t getting out, I wasn’t getting seen, I wasn’t getting through the door,” she remembers. “And so I thought the next logical step would be to come back home where my roots are and really start something bigger than myself.”
Both knew that sitting around and waiting for something to happen wasn’t good enough.

Within a week of Melanson returning to Toronto, Traoré reached out to her old high school friend (both were drama majors at Etobicoke School of the Arts) and asked if she would be interested in reading some scripts she had written.

Between pages, something clicked and a film production company was conceived.

“It was a pretty natural progression,” says Melanson, who instantly gravitated towards Traoré’s script All of Me (originally titled The Things We Do For Love) because of the strong female characters.

Only a few months later filming began under the direction of Jon Riera. Traoré and Melanson looked for talent exclusively within the City and cast themselves in roles as well – after all the script is based on Traoré’s lived experiences.

“The whole process was a learning experience. We came up to road blocks all the time,” said Melanson, including finding funding and securing locations to shoot, which included Traoré’s apartment, generous friends’ apartments and one side street south of Queen West.

“It went way better and way more smooth than I ever would have imagined; and it was one of the first times in my life that I was a part of a project from start to finish,” said Traoré.

The duo has selected the next script they will put into production and are looking for more short film ideas, the more experimental the better.

“It’s important for myself, as a women of colour, to utilize what we’re doing as a platform to make space for what isn’t being done in the industry right now,” said Traoré.

“I’m not saying I haven’t been afforded opportunities in this city because of my colour. I’m just saying that I’m not auditioning as much as certain demographics. I’m not being seen for a wide array of roles. It’s limited. More than anything I would like to see myself and other people of colour cast as people and having it not be about race,” she said.

For Melanson, the chance to play strong female leads is a rarity and she hopes to create more productions promoting women’s rights.

“We just want to have stories where we have a voice and take control of our image,” she said.

“I think that using our company as a platform to provide opportunities to people who don’t necessarily have all the pieces of the puzzle to make their projects come to fruition is something that we definitely want to offer,” said Traoré.

The Toronto International Short Film Festival kicks off Wednesday November 12 and runs until Friday November 14, 2014. Films will be screened at Carlton Theatre.