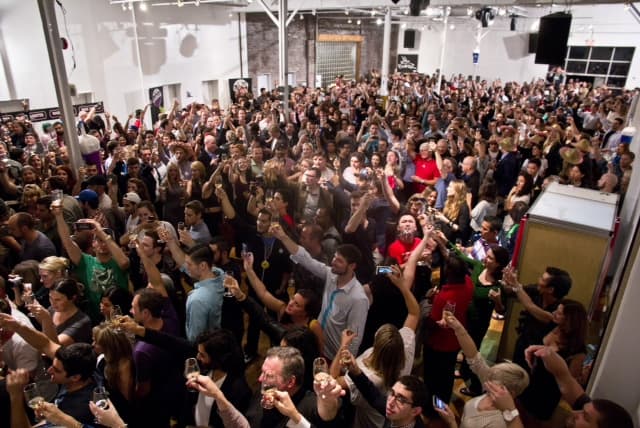 Hearts pound. Tempers flare. The line snakes around the shiny Gourmet Bitches  food truck that sits pretty on the patio of 99 Sudbury. Every wanted, no, needed, to be a contributor in Tequila Tromba’s attempt to break the Guinness World Record for largest tequila tasting. What happens next? Those who attended are now a part of history!  A 900-strong toast and an enormous and raucous cheer rang in the truth: cross breaking a world record off your bucket list. Happy Mexican Independence Day!

After that business was attended to, the party really began. Tickets included three flights of tequila which let party-goers sample Anejo, Resperado, and Blanco tequila. You could have your tequila in drink form, shot form, and in at least one case, poured directly in the mouth (from an impressive distance!). Mott’s Clamato was also there to give out an advanced version of the traditional Canadian ceasar. This time, it was tequila-strong and garnished with lime, a peppered rim and a slice of pineapple. We likey.

We also got to sample some delectable tacos from Fonda Lola, the taco pop-up that will be a full-time eatery on Queen Street West this October. Pulled pork mole was a fan favourite and the roasted chayote taco’s smokiness definitely kept even the biggest of meat eaters satisfied. But the food didn’t stop there, Rock Lobster, Hot Bunzz, and Playa Cabana also threw down some Mexico/tequila-inspired spirit. Holding it down on the patio were those Gourmet Bitches and Valdez, with their Latin street food ceviche. Also on the patio? Hand-rolled cigars from Momacho, coming in a variety of sizes. Everyone looked like such gangsters; you would just stand there impressed until realizing that you too, can be a baller.

With that much tequila flowing, and with Bangs and Blush playing the sinful beats of 90s/early 2000s Hip Hop and R&B, the party was in prime position for a dance party. Unlike a typicalThursday event that began at 6:30 PM, this one went into the wee hours. Who even knows what happened in the photo booth? A mariachi band kept people in good spirits as they wacked at piñatas. Sombreros were being circulated as the booty-shaking persisted and the music continued to comfortably blast throughout the loft space. Can we just do it all over again tonight?

This Weekend, the Pan American Food and Music Festival Returns to Yonge-Dundas Square