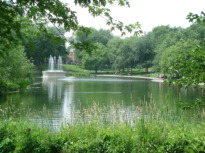 Summer In The City: Your Guide to Montreal Green Space

Words and Photo by Tyler Yank
When it’s 32 degrees and your summer “tan” is still a bright shade of ivory, action must be taken. Grab your sunscreen (SPF 60 … right?), and pick a patch of grass – in Montreal, there are so many great parks around, that you officially have no excuse to be sitting inside on a summer day.
In the West:
Amidst the mansions, boutiques, and SUVs the size of my apartment, Westmount Park acts as a humble haven in contrast to its wealthy surroundings. Children playing on the jungle-gym, garden paths that circle around a lily pond, couples tucked away in the bushes, giggling and rubbing noses (or whatever couples do, it’s been a while) – Westmount Park is a picture of beauty and delight. Whether you want to smell the flowers, read a good book or catch some rays, in the west end of the city, this is the place to do it.
Also, when the sun finally gets too hot, don’t forget to hit up Bilboquet – just blocks away on Sherbrooke – for a fruit sorbet or an ice cream cupcake. I’m halfway there as we speak.
Downtown:
While Mont-Royal Park typically dominates the centre-town green space category, the city’s namesake is not necessarily the only spot to catch some afternoon sun. Specifically, the McGill University lawns on Sherbrooke West, just a five minute walk north of the Eaton Centre, are every summer student’s dream.
Let’s just paint a quick picture: a grassy slope, complete with flowers and tree shade, overlooking a large sports field that is often occupied by athletic and topless men kicking around soccer balls and tossing Frisbees. Well, that’s decided.
In addition, despite the fact that McGill is feet away from some of the tallest buildings in the city, the campus’ landscaping truly eliminates the feeling of being ‘downtown’. The great location also ensures that major shopping malls, coffee shops and metro stations are mere steps away. So grab your dark-tinted sunglasses and check out some McGill scenery!
In the East:
Montreal dog-walkers, bike-riders, book-readers, and pond sit-besiders – you are in luck. Bike paths and history converge on Sherbrooke St. East: Parc Lafontaine. Centred around a large man-made pond, the slopes of green grass and shady poplars (dating back to the 1840’s) provide a great location for having a picnic, feeding the ducks, or (as I’ve witnessed) lying on top of your shirtless boyfriend and kissing his neck as he tries to read his book. Cough.
On warm evenings, visit Parc Lafontaine’s open-air venue, Théâtre de Verdure, for musical and theatrical performances (many of which are free to attend!) throughout the summer. Oh, and while visiting, always keep one eye peeled – rumour has it that Parc Lafontaine is home to one or two albino squirrels. Weird, yet wonderful. Just like Montreal.
For a full list of Montreal parks, visit the City of Montreal’s Parks page: http://ville.montreal.qc.ca/portal/page?_pageid=175,4782055&_dad=portal&_schema=PORTAL

Where to drink, eat, swim and shop in Montreal