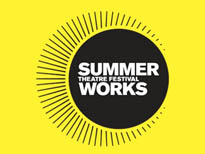 Summerworks Fest Runs from Aug 5th – 15th, and gives us the very best in indie arts!

This year marks the 20th anniversary for Toronto’s Summerworks Theatre Festival and what started as a small indie theatre festival has become an all encompassing interdisciplinary arts jam. The best part? Still indie. There will be over 40 plays, 10 days of music shows, a ton of free events, and a rehearsal hall turned playground where you can go between shows if you get bored. We don’t think there’s any chance of boredom to be had!

Here’s what we think you should check out:

All shows take place at the Lower Ossington Theatre, (100A Ossington) in either the Mainstage or the Performance Bar.

August 7th 10 pm – The ElastoCitizens like booty shaking, epic concert making music, and so do we! A must see show for those who enjoy electrifyingly, large scale shows with a possible overwhelming aesthetic. Amazing. Solo spoken word and rap artist Kamau will also be spreading some love around on the Mainstage, making use of his multi talented flavour.

August 12th 10 pm – The Wilderness of Manitoba, Toronto homeslices will be playing their signature experimental folk with a touch of electro. If they don’t wear you out, stick around to check out The Mountains and Trees, Entire Cities, and The Weather Station.

“OR” – Aphra Behn, one of the first English women to make a living by writing, comes alive in this provocative comedy. Along with her friends Charless II and Nell Gwyn, free love and cross dressing ensues amid lots of laughs and sexy times. Directed by the uber talented Kelly Straughan and equally acclaimed cast – Damien Atkins, Sophie Goulet, and Melissa-Jane Shaw, this witty comic feat is sure to stimulate your senses.

“Biographies of the Dead and Dying” – An author rents a haunted house to write a biography of a ghost, resulting in an intense relationship with the dead. This minimalist play received crazy acclaim at the Vancouver Fringe Fest. The trailer alone gives us the heebie jeebies!

“Loving the Stranger or How to Recognize and Invert” – A spectacle of sexuality in 1920’s cabaret style, this play explores the life of Peter Flinsch, a German Canadian artist who was arrested for kissing a friend at a Nazi Christmas Party in 1942.

The front rehearsal hall of the Lower Ossington Theatre has been transformed into an interactive installation, called the Playground. It’s a place to come between shows to collect your thoughts, decide your next location, and get a sugar fix. The concept for it is based on Montessori education techniques of self guided play. Remember “stations” in elementary school? This is sort of a rest station where you can hang out and play with some crazy toys ranging from projectors, cameras, action figures, tickle trunks … even make a music video!

From the self proclaimed lunatics responsible for the play series Impromptu Splendor and The Carnegie Hall Show, (a weekly variety show at the Bread and Circus in the market) comes this nightly performance series, consisting of an amalgamation of improv, music and features special guests each night of the festival. It’s all going down at 100 Ossington, at the Lower Ossington Theatre, starting at 8 pm each night. Pay What you can. Keep your eyes peeled for these special guests:

August 6th – Maylee Todd will be gracing the stage, singing some motown inspired ballads and manipulating some obscure instruments. (Hopefully she busts out a few moves from her notorious interactive aerobics act “Sweatshop Hop”, which aired on MuchMusic this year, but who knows.)

August 9th – Snowblink, fresh off their tour with Owen Pallett, this wistful duo will be throwing a few of their own poignant ingredients into the mix.  Expect big sound and lots of soul.

The festival presents a series of three walking tours, all hope to help answer the question “what IS the Queen West strip?” The influential neighbourhood that acts as a home for many Summerworks festival venues (Factory Theatre, Theatre Passe Muraille & The Theatre Centre) is also home to some of the most creative operations in the city, and some very interesting souls.

“Invisible Toronto” – This stirring tour invites its strollers to open their eyes to things that are simply not seen. The Aboriginal population in the area fall into this invisible category. Fallen Johnson takes her tour to the old tobacco shop that had a wooden Plains Indian statue, the old location of the “Red Indian Art Deco shop”, and Theatre Passe Muraille, where Native actor Graham Greene was hassled by cops who even followed onstage. Fallen’s personal anecdotes and entertaining character make the tour as amusing as it is necessary. Aug 5, 7, 9, 11, 13 & 15 at 6:30PM / Aug 8 & 14 at 4PM