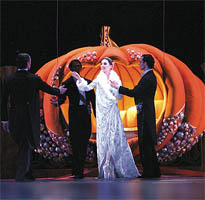 Some young girls dream of perfect pink tutus, sparkly shoes and a passionate prince. I do not – and this, surprisingly, is why I loved the National Ballet of Canada’s performance of Cinderella at The Four Seasons Performing Arts Centre. Don’t worry, I’ll explain.

Instead of being the Disney-like Cinderella we would expect, the production was an amazing amalgamation of influences. The costumes referenced the Bright Young Things of the 20s and 30s, Cinderella’s home was a French maison turned into a Midsummer Night’s Dream garden and the intricately designed ballroom set was very Aubrey Beardsley. The production was a grown up version of the fairytale we know.

By the time Cinderella descended from the ceiling, in a glowing pumpkin and sparkly Swarovski shoes, I was swooning; it was a total ballet orgasm. All the little mismatching details contributed to an overall story that was stronger and more magical than traditional incarnations of Cinderella.

Cinderella and the Prince danced at the ball, but it was her step-sisters, played for comedic effect, who stole the scene. And then the Prince began a worldly and bizarre search for the perfect foot. Amelia Earhart represented his American investigation, he encountered Bizet’s Carmen in Spain, and beautiful ballerinas from Tokyo and Bombay tried on the lost slipper before he found HER. Then I got my romance.

The dancing was lovely and the costumes beautiful, but it was truly David Boechler’s inventive production design that stole the show.

Watch video of the ballet here  and get tickets to upcoming productions.