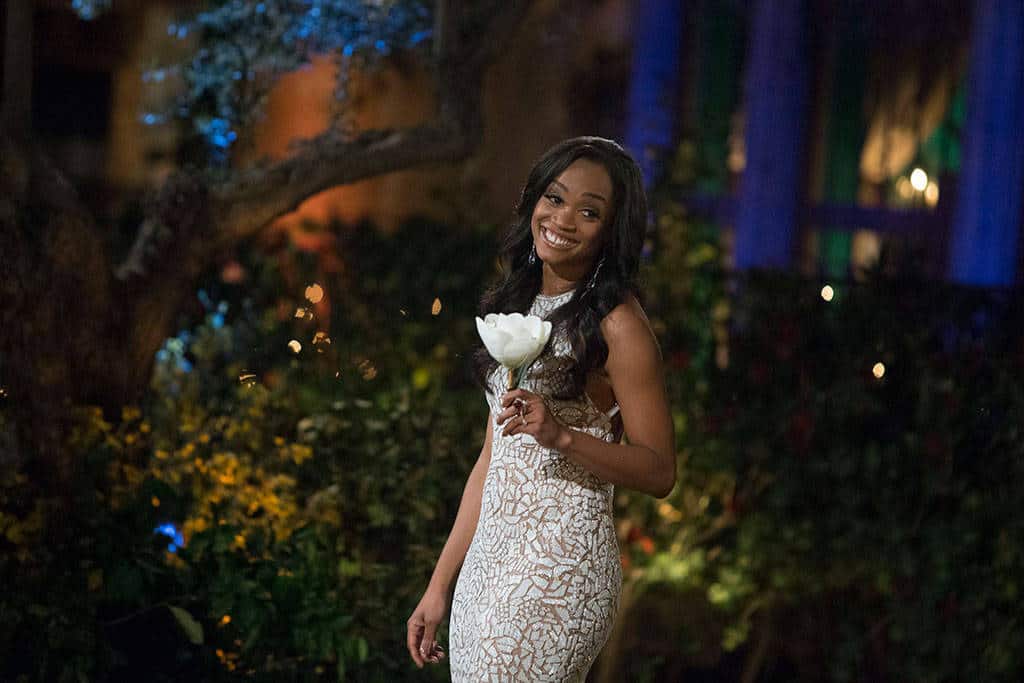 You know summer is almost here when it’s time to put on some sweats and watch The Bachelorette premiere. While most people were frolicking outside watching fireworks, I stayed home and watched a different sort of explosion on my TV. Because wow, did sparks fly on the first episode of the thirteenth season of this classic reality show!

In case you haven’t turned on a television in the past fourteen years, The Bachelorette is ABC’s female-centred spinoff of The Bachelor. It’s a dating show where the titular bachelorette is introduced to thirty-one oversexed men in their twenties and thirties who have been selected to compete for her hand in marriage. Said bachelorette winnows them down to one lucky guy after a series of outlandish dates. These outings typically involve circus performers and bungee jumping. Private concerts by supposedly famous bands you’ve never heard of are also a prominent feature of the franchise.

This week’s premiere marked the first time the series has had a black bachelorette. The franchise has historically been famous for its racism, rarely casting people of colour as contestants, and preferring white men named Ben or Brad to be the bachelor; the bachelorette is most often a nice looking white lady whose name ends with an “I.” Now, there’s nothing wrong with white men whose names start with the letter B. Nor do I have problems with white women named Andi or Ali. Having said that, some diversity was long overdue.

Rachel Lindsay is as charming as she is successful. An attorney from Texas, she comes from a high-achieving family (her dad’s a judge) and has spent most of her adult life focusing on her career. At 31, Lindsay isn’t just breaking barriers as the show’s first black bachelorette – she’s also the oldest woman ever to take on the role.

As the show began, Rachel participated in the obligatory montage of trying on long, sparkly dresses, playing with her dog, and walking on the beach alone. Obviously, she looked fantastic in every shot. Rachel is both smart and beautiful. It’s a little unfair how #blessed she is, but she’s so charming that I can’t help but love her anyway! She actually told the cameras, “I’m sassy, yet classy.” That is my new life motto.

The most interesting thing about Rachel is how she is both aspirational and relatable. She’s fashionable, stunning and successful, but she also says things your best friend would say. For example, while driving down Rodeo Drive in LA, she declared, “Oh my God, I feel like I’m in the movie Clueless!” Rachel is patently adorable, and even though I’ve seen just a single episode, I’m ready to declare her the best bachelorette of all time!

The men they chose to court Rachel were, however, not all as impressive as our leading lady. A contestant who has already received more than his fair share of airtime is Lucas, whose job is listed by the show as “Waboom.” Apparently, that’s a word he invented. Now, if it turns out he actually has found a way to monetize that made up exclamation of joy, I actually think Rachel should marry him, because he’s a genius. Sadly, I’m assuming he’s actually an unemployed person who just goes around wearing a t-shirt with “Waboom” scrawled on it, which he sported for his first night on the show. He even shouted, “Waboom!” when he received his rose at The Rose Ceremony. He is VERY committed to this catchphrase. He’s trying to make it the next “Yas Queen” or something.

Then there was Blake, a personal trainer who is already enemies with Lucas (aka Waboom Dude). He believes Lucas is only there for the fame. I could see this as a concern; however, this critique was rich coming from a man who bragged to the cameras about the “amazingness” of his penis. Dear Blake, “amazingness” isn’t even a word! Clearly your vocabulary isn’t as well endowed as you claim to be.

Of course, there were some actually eligible men in attendance. The show’s formula is, after all, to balance the cocky weirdos with successful hotties. There’s a boxer whose daughter’s middle name is “Rachel,” which suggests the fates want Lindsay to be her stepmom. There’s Mohit, who has his own startup and is a competitive Bollywood dancer. And then there’s my personal favourite, Daniel. After being traumatized by his older brother’s suicide, young Daniel started acting out and got caught up in some illegal activities. The judge who took on his case, however, had a heart to heart with the kid and told him he had potential. Inspired, teenage Daniel decided to stop breaking the law, and instead pursued a career in it. Swoon!

In an interesting turn of events, one of the competitors was a former camper of Rachel’s from when she worked as a counselor at summer camp. Rachel found this awkward because apparently he was a troublemaker. She was constantly telling him off for being a bad little boy, but not “in a sexy way” she reassures the cameras. As a former camp counselor myself, I don’t care how hot any of my campers grew up to be – they are not getting nookie from me. The thought of it is just too creepy!

Once all the men had arrived at the show’s mansion via limo, Rachel went about charming them in her sparkly white dress that made her look like The Swan Princess. Rachel looked absolutely stunning as she canoodled and kissed a variety of handsome gentlemen, all of whom had highly developed biceps. Unfortunately, Rachel’s haram of men were fighting over her in no time. It’s like they forgot the show’s basic premise requires Rachel to date multiple men. I predict toxic masculinity will feature heavily this season.

After speaking with all thirty-one suitors, Rachel began The Rose Ceremony. That’s the highly ritualized process by which she selects the men that will stay to compete another week. Those who survive the elimination are handed roses to mark them as chosen. It feels vaguely dystopian, like something out of The Handmaid’s Tale, except in theory, the woman is the one in control here. Naturally, a mix of decent guys and weirdos received roses. It’s important for the show to keep things interesting, and the season is still young.

Anyway, I am happy to report this first episode marked a delightful beginning. Rachel’s season of The Bachelorette promises lust, love, and everything in between! I cannot wait to text about it with everyone I know! I am already fangirling over Rachel Lindsay, and I truly hope she finds her soulmate on national TV. The Bachelorette is selling me a fairytale, and for now, I’m buying it.