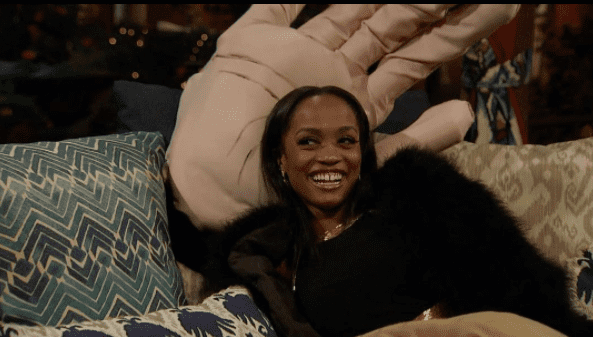 They say the third time is the charm. Well, In Bachelorette world, the third time’s when all hell breaks loose! Episode Three was a veritable buffet of bizarre – and sometimes disturbing – conflicts.

This installment began with Rachel confronting DeMario. As you probably remember, DeMario is the guy who forgot to break up with his girlfriend before going on the show. When said girlfriend showed up last week to achieve vengeance, DeMario initially claimed he didn’t even know her. His lying ways got him kicked off. Apparently DeMario is apparently a resilient philanderer, because he returned to the mansion to beg forgiveness.

While Rachel did grant DeMario an audience, she didn’t give him a second chance. She’s far too smart for that. Instead, Rachel sent him off with a withering stare and a biting one-liner: “I need a man, not a boy.” I was so excited when Rachel said this that I literally jumped up and down on my couch like it was a trampoline! You guys, Rachel was born to be The Bachelorette!

Next came The Rose Ceremony, where – thank the Goddess – both Whaboom Guy and his nemesis Blake were eliminated. Of course, Blake’s reaction was to get irate. He claimed he “deserved a rose” from Rachel, because apparently women owe men like Blake their affections? Just to hammer the point home, Blake even told us he self-identifies as “a nice gentlemen.” Well, any woman who’s ever been on OKCupid knows self-described “nice guys” are the devil incarnate. Rachel is well rid of him!

On his way out, Blake took advantage of the opportunity to confront Whaboom Dude and scream, “Whaboom is not funny!” I agree with that sentiment, but neither is starting a shouting match outside the mansion. You know, because he’s “a nice gentleman.” That’s what nice gentlemen do, right?

When the first group date of the episode finally arrived, the anger was replaced with a different sort of tension – sexual tension! Rachel took the boys to The Ellen Show, where they performed a bizarre strip tease ritual with the audience. This was followed by a game of “Never Have I Ever.” Rachel was pleased with this date, as she feels it important to see the men topless. I personally believe that makes Rachel a good feminist. Yay for embracing The Female Gaze!

The episode’s one-on-one date later went to Anthony. It involved horseback riding down Rodeo Drive and buying cowboy boots. How the hell do the producers come up with this stuff? To put it politely, it wasn’t my cup of tea.

On their outing, Anthony and Rachel had medium chemistry. They had a nice conversation about their respective childhoods, but there was no sizzle. When Rachel looks at someone like Alex, you can see her undressing him with her eyes. By contrast, with Anthony, everything seemed much more…polite. I feel like they should just be friends.

Incidentally, the episode’s second group date also involved lots of male toplessness. It took the form of mud wrestling. I am not making this up. The men literally writhed around with each other on the ground, covered in guck. It was simultaneously hot and incredibly disgusting. I do not want to know about all the crevices that mud got into!

Of all the awkward moments on this week’s episode, however, the most awkward involved Frederick. If you don’t remember Frederick, he’s the guy who met Rachel when she was his camp counselor. I know, it’s creepy. You’re not the only one who thinks so.

Look, Frederick is a perfectly charming (and very handsome) man. But that doesn’t matte in this situation. As someone who herself is a former camp counselor, if any of my former campers showed up trying to date me on TV, it would give me the skeevies. When someone’s been your camper, they are always your camper. That’s how camp works. Everyone knows that! Well, everyone except Frederick, who lunged at the chance to make out with Rachel.

After their kiss, Frederick was convinced he and Rachel were headed straight for wedded bliss. Rachel, however, decided to dump him two minutes later. He got sent home ahead of The Rose Ceremony just to end the weirdness. I do not blame her one bit.

While this week’s episode was very eventful, next week’s looks even more so. The men have decided to pick Eric as the next target of their bullying. Yeah, toxic masculinity is about to get even more toxic. I’m scared to see where that particular plot goes…