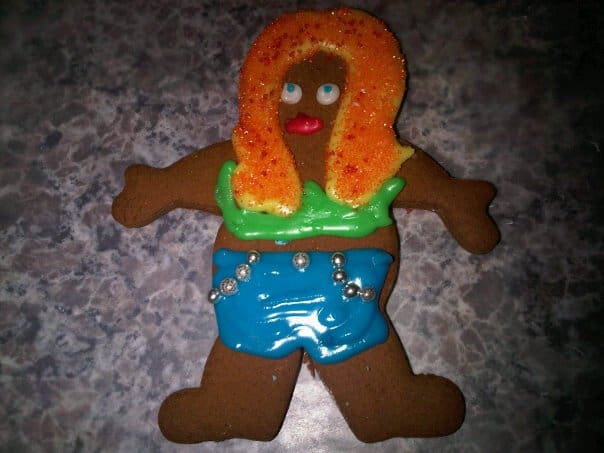 "I once received a belt made entirely out of pop can tabs."

The Grown-Ass Woman’s Guide to: Gift Giving and Receiving

You’re a grown-ass woman, this ain’t your first festive rodeo. You’ve been around the block, Christmas-wise. You’ve seen some stuff–some holiday stuff, so you’re not surprised by the season’s annual hardships: unnecessarily complicated Secret Santas at the office, shopping for your one goth cousin, trying to figure out what to get your Mom after last year’s “They’re great because it’s like Kleenex, but at a size you can keep in your purse!” debacle… you get it. Been there, done that, returned the T-shirt with a gift receipt on Boxing Day. This is not for you. This is for your much-beleaguered family, significant others, or co-workers who need to get you something. Just forward this along to them with a quick xoxo and give them the gift of knowledge… of how gifts work. Here we go:

* The point of a present is that you’ve spent some time thinking about what this specific person might like to have in their life, and kindly procured it for them. It’s important that whatever you’re frantically wrapping at 11:45 on December 24th is something the person you’re giving it to might actually like to receive, not a gift to congratulate them on starting their new life as the Person You Want Them to Be. Gift guides and monstrous articles like this one often suggest language lessons, fancy-guy books, or better clothes as ideal gifts for a boyfriend, for instance, and honestly, if you want to date a guy who speaks French, date a French guy. The holidays are perhaps the least appropriate time in the calendar year to send your loved one the message, “God I wish you were different.” You can’t change him with a cardigan, ladies, and you’d be gross to try. Give the people what they want!

* Minimize your stress levels by using your brain. If you’ve got a price limit or budget in mind, stick to it (but don’t worry too much if you’re a few bucks over/under, either). Don’t buy clothing for someone unless you’re 1,000,000% sure you know their size. 1, 500,000%, even. Where possible, get a gift receipt. If this is a homemade thing, go online and find something you can make that you’d also like to receive. Have a quick goog or facebook creep to see what you can glean about the person’s interests. Almost anyone would be happy to receive a simple scarf in a soft, quality fabric.

* If you do not understand someone, it does not mean they are ‘wacky.’ Do not get a wacky gift. (I own so many novelty key chains, you would not believe.)

* As I age, the crass commercialism of the holiday season is starting to really grate on me [This sentence brought to you by the Grad School Grandma], and I’m less and less interested in going out and grabbing the kinds of pre-bundled stuff we all remember from Secret Santas of yore. Body Shop lotions and soaps, anyone? Funky pyjamas in Not-Your-Size? A stationery set, for some reason? Tootsie Rolls… just like, a ton of Tootsie Rolls?? No one wants this stuff. Buy your giftee a cool experience–tickets to a show, the aquarium, a Groupon for a massage, whatever–or make a donation in their name to a kick-ass charity (warning: a lot of people hate this) (they’re complete grinches, but I also kind of see where they’re coming from) (don’t judge me). There are a lot of options that don’t say, “But you love the Shopper’s Drug Mart sale section!” Think outside the non-recyclable, non-biodegradable box, is what I’m saying. [Grad School Grandma strikes again!!]

* The number one rule of gift receiving (reception?) is this: be cool about it. Just be cool! Even if this gift is the worst thing you’ve ever seen, think of a simple, believable nice to say and thank the giver accordingly. I once received a belt made entirely out of pop can tabs and still managed to accurately guess that an independent artisan had made it, phrasing the question like maybe it was a compliment? Don’t be a dick, basically. Someone has tried, in this moment, to do a nice thing especially for you, and isn’t that the greatest gift of all? Appreciate it, you Scrooge!

* If you really, earnestly love the gift you’ve been given, so much the better. Now’s the time to express it loud and proud. A lot of people prefer giving presents to receiving them simply because it feels great to really nail it with a present. If you love it, let them know! I’m not saying you need to Sally Albright at Kat’z Deli about it, but, you know, revel in it a bit. It’s like giving a sneaky extra gift back to the giver.

* You were given a gift, no one “gifted” it to you. Gift is a noun, not a verb. Take that kind of talk back to Pinterest where it belongs.