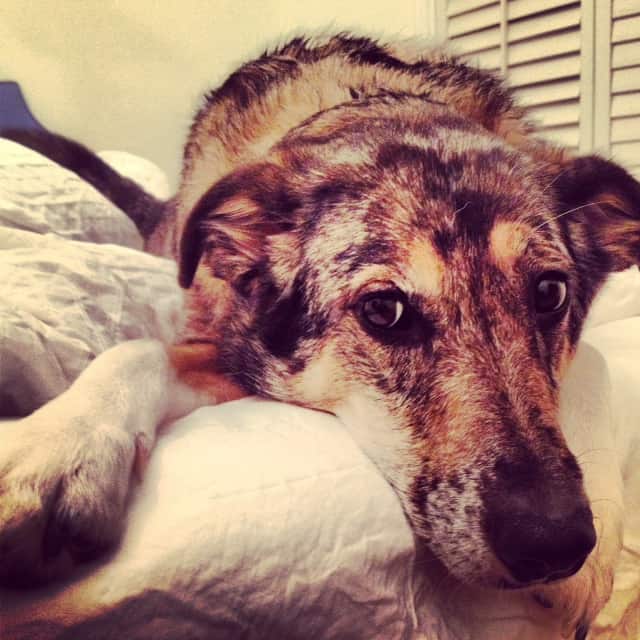 The Grown-Ass Woman’s Guide to: My Mom’s Dog, Sadie

You’re a grown-ass woman, so I feel like I can level with you. I have tried, multiple mornings in a row, to attempt to write a useful and coherent (well, semi-coherent at least) Grown-Ass Guide, but have been distracted to the point of abandoning the whole endeavour by my mother’s dog. I recently moved back to Toronto from the UK (holla), and am splitting my time between my parents’ places until I find a more permanent living situation. Staying with my mom rules. Staying with her dog does not. Here is why.

She wants to put her tongue in your mouth

As far as I can tell, getting her tongue into your mouth is Sadie’s number one goal in life. Aside from the occasional walk or treat, it seems to be, Backstreet Boys-style, her fiiiiiiiiire… her one… desire, believe, when I say… you do not want this dog’s tongue in your mouth because it is super fucking gross. When you are least expecting it, but happen to have your mouth open—in conversation, say, reaching down to pet her while talking to someone about something else—she will leap into the air, tongue first, and just headbutt you with her mouth. I’d venture that her success rate is probably 30%, but she is a tenacious pup and this does not get her down. A real can-do attitude on this dog. She LUVS2FRENCH. I like to think this is my influence, because tbh my own make-out style is pretty similar. “Thanks for asking, friendly stranger! I just finished grad school and now I— WOAHHHH we’re makin’ out!” – how I met my boyfriend of four years. JK, consent is very important, we are not dogs, and also JK because I just pictured my boyfriend at grad school and he looked so sad and bored I had to apologize to the fantasy version of him.

Do not hug my mom in front of her

Sadie is a happy canine. She loves many things: Doug, the man who takes her on a two hour long walk every day; eating; sleeping; desecrating the meaningful and important stuffed animals of my youth by ripping them open and eating their eyes (RIP Penny); stealth-barfing in places you rarely visit so that you don’t find it until days later when it has hardened into a kind of carpet crust that she then rediscovers and tries to eat; etc. etc. etc. But the main thing she loves is my mom. Her and my mom have the kind of animal-human friendship that Disney films are made of. If my mom was stuck in a well, Sadie would not run for help, she would like, grow hands and weave a ladder out of the surrounding grasses and haul my mother carefully out. Whatever, Lassie. This love is returned by my mother, who refers to the dog as her “fur child.” Fur… child. 100% of moms-with-pets I have told this too have adopted the practice. Tell your pet-obsessed mom today! Anyway, if you try to hug my mom hello or goodbye Sadie will run at you and try to pry your face away from her beloved mother’s using her sharp little claws while barking at a very high volume. It’s not great.

Sadie also <3s shoes. Specifically, she loves to put a shoe in her mouth and run around the house crying frantically while just holding it there. Eventually she takes it with her and hides under the dining room table, licking the sole and whimpering. We don’t know what it means. I suspect she has some kind of PTSD, or OCD, or AAIJMU (Another Acronym I Just Made Up). Something is wrong in there. She has turned her own hair gray from stress.

She has a more refined palate than most humans

Her diet consists almost exclusively of whatever we are having for dinner, and bits of the envelopes and important documents she rips from the mail slot before it has even hit the ground. My driver’s license has a puncture-hole in it from when it was delivered to our home. I think this paper and steak-based diet has also led to a more sensitive digestive system than most dogs. Basically, girl LOVES to pee. When she’s excited, when she’s scared, when she hears a male voice, when she’s outside, when she hasn’t been outside in a while, when she’s stressed out (which is always), when she’s feelin’ chill. Bitches be peein’.

She can speak English

“She CAN.” – my mother. Sadie is basically a small, sheddy human, at this point. She sleeps lengthwise in my bed, on her back, with her head on a pillow, like some kind of dog boyfriend (aka A BOYFRIEND, am I right ladies?!!!!!!!!!!!!!). It is very jarring, not least because her fur seems to carry a bunch of small pebbles and other crunchy particles that end up giving you some kind of weird in-bed exfoliating massage you did not ask for, and also because her favourite way to wake you up is to open her eyes and start licking your face like you are made of the most delicious dog treats ever. If this fails, she will jump dramatically off the bed and bark at random. She likes to do this in the nighttime, too. Just a casual bark like “A MURDERER IS OUTSIDE! Or maybe a tree moved. It’s hard to tell but I’m definitely gonna keep doing this at 20 minute intervals until you don’t feel safe and need to go hide because you are 85% certain you’re about to get I Know What You Did Last Summer-ed.”

Sadie is the sweetest, most loyal, loudest, weirdest dog I have ever met, but it’s becoming increasingly apparent that we are not good co-workers. Will report back next week when I have found a good cafe or something to work from. Until then, this has happened to you because my legs and feet are currently being licked like a well-moisturized ice cream cone, so who is suffering more?