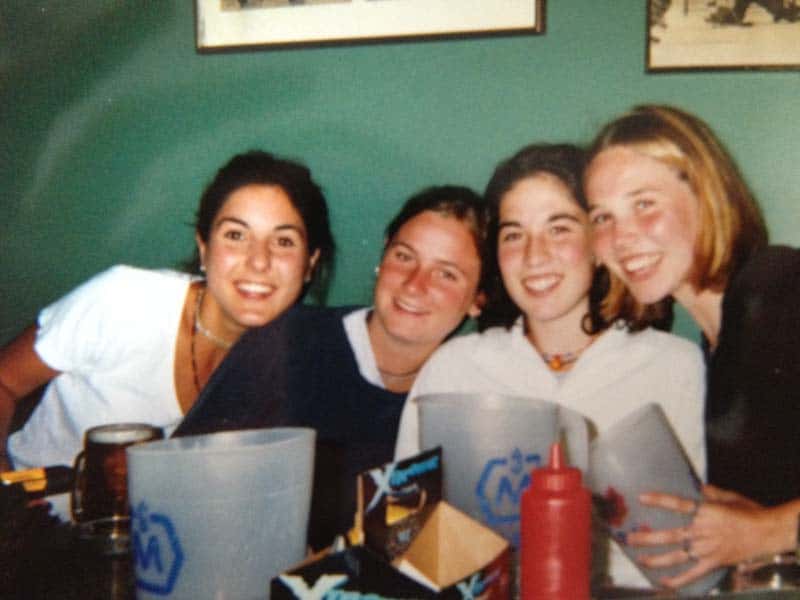 The last time I listened to The Indigo Girls was when I was making mix tapes—decorated with shiny stickers—for my camp friends in the mid-90s. So when I received an invitation from a close friend to attend their concert last night at the Danforth Music Hall, I smirked, recalling that time in my youth when singing songs like “Galilelo” and “Closer to Fine” while gathered in a horseshoe around a campfire was so fucking dramatic. At times, tears would stream from my face as I belted out lyrics. Indeed, The Indigo Girls were a significant soundtrack to my tumultuous teenage years. While at the concert, memories of that time rushed over me and I found myself, once again, holding back tears as Amy Ray and Emily Saliers strummed their acoustic guitars, projecting their beautiful and perfectly harmonized voices to an auditorium packed with women of my generation and older. We held hands, swayed, and collectively took a trip back in time. This was some powerful shit.

I looked at the crowd and wondered how many of these women, whom I don’t know, had also attended that rainy Lilith Fair in 1997. What had happened to everyone since then? I remember being really drunk at that concert, sitting in a pile of mud on the grass seats of the Molson Ampitheatre. I had driven down that day from Haliburton, Ontario with a carload of fellow camp counsellors and had chugged back Mike’s Hard Lemonade with a handful of magic mushrooms. I remember the stage lights, and the absolute unity felt when we all sang their songs together in the rain. Having chucked my Converse One Stars in my filthy M.E.C knapsack, I was barefoot. If I close my eyes, I can visualize the dirt and grass stuck around my wet toes with mud splattered around my ankles and scrawny shins. The lines for the porto toilets were insane, so I just dropped my shorts and pissed—amongst my friends—on the crowded lawn. What sounds like a total nightmare to my 33-year-old self was a brilliant night for a 17-year-old with a strong desire to get lost in the moment and feel rebellious and free.

I was listening to The Indigo Girls as a sexually confused and horny teenager. Last night, I could practically feel those complicated feelings and remember that summer when I first started experimenting, with girls and boys. I had a closeted girlfriend before I ever had a boyfriend, and I remember how dirty I felt. It wasn’t that long ago, but being openly gay or bisexual back then was very different than it is now. But The Indigo Girls made me feel like it was all good. I had secrets, so many secrets. I don’t have secrets anymore, and I like that.

Listening to them last night also brought back visuals and sounds of slamming doors. My mom and I used to fight all the time; we are best friends now, and I haven’t slammed a door in years. But with the music, I visited my old bedroom. I scanned the walls and could recall with clarity every detail, from the ripped CK ONE ads that decorated my chest of drawers, to the childhood stuffed animals that still lined the front window, to the glow-in-the-dark stars on the ceiling, to my collection of Lip Smackers next to the bed, to my closet full of hidden beer bottles and a couple condoms from sex-ed.

Last night, I sat with the same close friends that I spent countless late nights with in the summers from 1995-97. As I walked out of the theatre, I ran into a dozen others from those same summers. Since then, many of my fellow camp friends have had children, some have suffered great losses, some have battled Cancer and addiction, some got married and have since divorced. But last night, all of us were together again in that campfire horseshoe, singing in unison and looking out into the starry night, wondering what was yet to come.