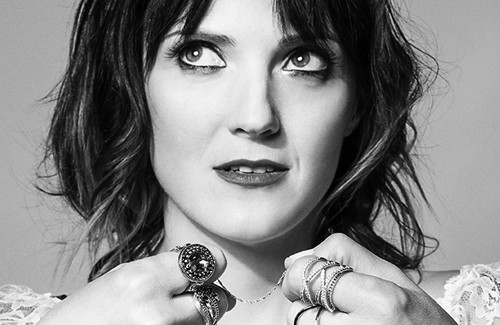 The Women of #JFL42: Jen Kirkman

Jen Kirkman’s Netflix special, I’m Gonna Die Alone and I Feel Fine, was named one of the best specials of 2015 by The Atlantic and NY Magazine. Her latest Netflix special, Just Keep Livin’?, came out in January 2017. She’s a New York Times best-selling author of two books, I Can Barely Take Care of Myself, and I Know What I’m Doing & Other Lies I Tell Myself. Her television stand-up appearances include being a five-time narrator on Drunk History, regular appearances on Chelsea Lately, @Midnight, Conan, and The Late Show with Stephen Colbert.

JK: The impact that eating meat has on the environment AND the fantastic Twitter account of an older woman in NYC who became an accidental fashion icon, @iconaccidental.

Stranger Things – which isn’t like me. I don’t like sci-fi or scary things, but it has a certain nostalgia for me. It’s weird to see Winona as a mom and not the teenaged star, and the show has overtones of E.T., so it’s probably why I was so compelled.

That I’m a lot stronger inside than I ever thought I was and that I was suffering from some ancient bad self-esteem.

I’m reading a book called the Trauma of Everyday Life by Mark Epstein. It sounds depressing but it’s comforting and matter of fact.

Not that many funny things have happened to me in 2017. But here is an example of a thing I find funny that will not be funny to read but here goes: My sister has two cats: Mittens and Daniel Tiger. She took care of some newborn kittens for a couple of days before her friend was able to adopt said kittens. She had to lock them in her den at home so adult cats Mittens and Daniel wouldn’t disturb them. She took a picture of Mittens and DT staring through the glass doors into the den and the expressions on the cat’s faces are hilarious. I can’t fathom when I look at that photo that they don’t have actual human thoughts and feelings of anger, jealousy and confusion. This is not funny to anyone but me. But I still look at that picture, which I keep on my phone, at least once a day. I don’t have an overly sophisticated sense of humour.

Joan Rivers once told me to never get old. I think she meant it more profoundly than literally. But if she meant it literally, that’s good advice too. I just don’t have the power to carry out that advice.

That I love myself in ways I couldn’t have when I was younger because I hadn’t experienced enough to come back from. And I don’t have anything to prove. And I’m not really afraid of much. Even [with] the threat of nuclear war now, I’m like, “Eh, we’ve all had good lives.”