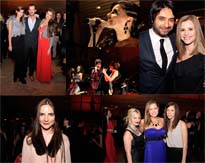 If you’re not familiar with the art form, it’s easy to brush off opera as something that only your grandmother—donned in her finest fur and oldest brooch—would enjoy. Operanation, the Canadian Opera Company (COC)’s annual fundraising event, is out to change that.

Established in 2005, Operanation raises money for the COC’s Ensemble Studio, a program that gives young Canadian opera professionals specialized training and career experience.  Now in its ninth year, Operanation aims to make opera more accessible to younger generations by combining opera with rock and pop music. Past events have known to wow crowds, with acts like Austra and Broken Social Scene striking breathtaking connections with the Ensemble’s members. This year’s event, which took place on Thursday, Oct. 18 at Toronto’s Four Seasons Centre for the Performing Arts, was no exception.

Titled Sweet Revenge, a tribute to the company’s fall production of Johann Strauss II’s Die Fledermaus, the evening had a lot to offer its guests, from food, to music, to art.

Featuring Victoria, BC’s Nelly Furtado and Hamilton, ON’s Arkells, the event continued to bridge the gap between the different singing styles, celebrating music’s overall universality. Furtado kicked things off with Ensemble baritone Cameron McPhail. The gorgeous Furtado even sang her hit song “Maneater,” much to the happiness of every 20-something female in the room.

By the time the Arkells took to the stage, everybody was ready to party—including the band. Their high-energy set, which featured the Ensemble’s soprano Ambur Braid and mezzo-soprano Rihab Chaieb, looked like a ton of fun. They played a mix of their own songs and covers (like “Psycho Killer” by the Talking Heads), and even brought pal and CBC Radio host Jian Ghomeshi on stage to help sing.

There was also an interactive art installation by Dean Baldwin, contemporary takes on traditional opera costumes designed by students of Ryerson University’s School of Fashion, tasty cocktails created by Barchef mastermind Frankie Solarik, Nadège Patisserie special Sweet Revenge macarons, and a grilled cheese sandwich station. Oh, and a ton of good-looking people (hello, Toronto Argos!). Is it next year yet?