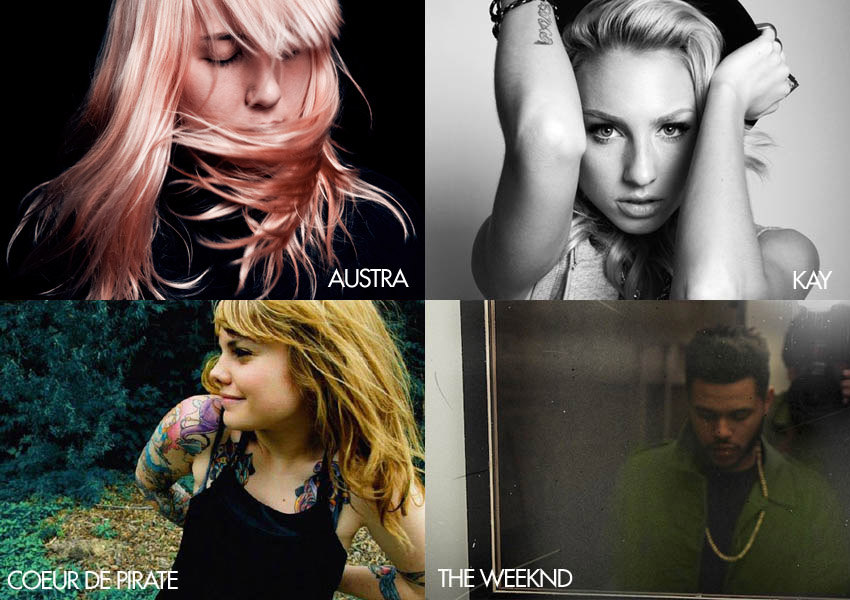 The Best Canadian Music of 2011

‘Tis the season for lists. So list on, we shall. Here is a wrap up, or a RAP up (depending on how you look at life) of Canada’s best music of 2011.

1. Fucked Up
It’s been quite the year for front man, Damian Abraham. He bounced back and forth between being the lead singer of a metal band to being a MuchMusic VJ (host of The Wedge). As the end of the year approached, Fucked Up snagged the cover story for Spin Magazine’s The Best of 2011. That’s right! Fucked Up front man, Damian Abraham graces the cover of Spin in Fucked Up style. Although there are rumors of a split don’t let this deter you from listening. Whether the band is breaking up or not, when music is good it’s good.

Song you know: Queen of Hearts

2. Austra
They’re from Canada but have filled up their schedule with gigs such as Vogue Fashion’s Night Out party. This is the kind of talent that needs to be shared. We want none of this keeping indie, indie. Enjoy and spread the gospel of Austra. They’re that kind of cool that is impossible to obtain unless you’re just genuinely being you.

Song you know: Lose it

3. Shad
Shad is undeniably Canadian and undeniably lovely. This is pure happiness in rap music form. His music can make a girl giddy and make a guy dance. Shad has been making moves for years now, crawling up the ranks in the Canadian music scene. You don’t have to be a rap fan to appreciate Shad; you merely have to be a music fan. He won the Juno in 2011 for Rap Recording of the Year. If you aren’t in the know, familiarize yourself.

4. Dragonette
With a quick scan of dragonetteonline.com you can see that this band has been on the go nonstop all year long. They’ve been bouncing around between New York, Belgium, Amsterdam and of course Canada. Dragonette hails from here in Toronto, and of course we all know that because they are Toronto’s electro-pop darlings. Their music doesn’t seem to get old, and they have definitely passed the sophmore album curse. Phew. And can we talk about their song Hello? It was absolutely EVERYWHERE THIS YEAR.

5. The Rural Alberta Advantage
This Canadian band could not possibly get more Canadian. They are from Alberta and their Facebook tells us that their music is about, "hometowns and heartbreak, born out of images from growing up in Central and Northern Alberta. They sing about summers in the Rockies and winters on the farm, ice breakups in the spring time and the oil boom’s charm, the mine workers on compressed, the equally depressed, the city’s slow growth and the country’s wild rose, but mostly the songs just try to embrace the advantage of growing up in Alberta." They sing what they know, and they know Canada.

6. The Sheepdogs
The Sheepdogs definitely checked off a list of accomplishments this year. From making the cover of Rolling Stone Magazine to being featured on Project Runway: they are appealing to a mass audience. To say it straight, they make rock music enjoyable again and it’s a wonderful thing. I can’t close my eyes without picturing their 70’s hair styles flowing to the beat of their songs.

Song you know: I Don’t Know (that’s not a joke)

7. Drake
Obvious choice? Yes. Same as old Drake? No. This is the mellowed out love making Drake. These new tunes are good for a slow jam session. If you weren’t a fan of the old Drake, drop your assumptions at the door and try again. He became someone different in 2011; which version do you prefer?

8. The Weeknd
He may be Drake’s best friend, but he is his own artist. You can actually hear how much he influences Drake just by listening to Take Care. He’s a soulful crooner singing right from his heart to yours. His songs are soft and subdued and make you think of every failed kiss, fling and relationship you’ve ever had. But it’s in a good way. He doesn’t even have a full-length release yet, but he does have two mix tapes you can download for free. His music is just extra sexy; it’s only the beginning for this guy.

Song you know: High For This

9. Mother Mother
Vancouver’s favourite band is making a name for itself in the rest of Canada. This is pop music at its finest. It’s so nice to find pure pop music that isn’t trying to be anything more than what it is, poppy. The lead singer looks exactly like Billy Idol, but don’t let that hold you back. Or maybe it will turn you on?

Song you know: The Stand

10. deadmau5
He broke out in 2007, and that silly toy head is here to stay. People continue to fall for him with every beat that he drops. Who isn’t dancing to Deadmau5 mixes at 5am when they don’t have work/school the next day? And although Drake took the top off the Rogers Centre, deadmau5 is the only Canadian artist to ever headline the Rogers Centre. That’s true pull.

11. Kay
Kay hails all ts he way from Nova Scotia. At this point in time we all know her name is Kay. Although that one particular song that taught us her name has the ability to get stuck in your head and never leave it, but we’re still appreciating it cause its so damn catchy. She’s signed up with Interscope and ready to take over the world. She raps, ‘I’m the baddest Nova Scotian that you’ve met.” That’s most definitely true. She’s making a name for herself, and yes that name is Kay.

Song you know: My name is Kay

I was going to include Arcade Fire but after winning a Grammy and a Polaris and getting tweeted about by our Prime Minister I think everyone already knows to listen to them. So here is who to look out for in 2012:

Coeur de Pirate: CBC is eating her up, and every french Canadian has a crush on her. She sings in french, so if you aren’t fluent you wont understand the lyrics. The music itself is so beautiful that the words won’t matter much to your ears. It doesn’t hurt that she has a darling voice that is deceiving because when you look at her she’s covered up in some badass tattos. Some of her YouTube videos have over 8 millions views, if this is only french people get on it you anglophones.
PS. The translation of Coeur de Pirate is Heart of a Pirate.

“Music is my outlet and my soft space to land”: Spotlight on Singer-Songwriter Miranda Joan