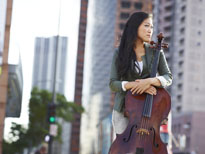 Next week, The Canadian Opera Company will be putting on two incredible concerts at The Four Seasons Centre for the Performing Arts, to celebrate the music and talent of gifted female composers and musicians.

On Tuesday, January 17th, five members of The Canadian Opera Company’s Ensemble Studio, Canada’s premier training program for young opera professionals, will showcase the music of female composers through the ages, in a concert titled In Praise of Women. Beginning with a piece by Hildegard von Bingen – yes, that’s correct – a German composer, writer, philosopher, mystic, Benedictine abbess, visionary and polymath (girlfriend was busy – what have you done today?), the concert will make its way chronologically through the years and end with selections by Libby Larson, one of America’s most-performed living composers. It’s a concert that highlights the work of ambitious, inspiring and groundbreaking female composers, whose work will be performed by today’s rising Canadian opera singers.

Then, on Thursday, January 19th, there is a concert by Se-Doo Park, a young and incredibly successful cello player. Park began playing the cello at age 8 and went on to be educated at The Juilliard School (on full scholarship), Indiana University and the Canadian Royal Conservatory of Music (Honestly. I loaded the dishwasher today, you?).

Both performances are from 12 – 1pm, so, if you’re downtown on those days, pop into the Four Seasons Centre on your lunch hour to check out what are sure to be beautiful concerts. The best part? They’re free!