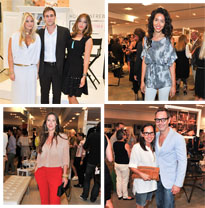 Last Thursday I attended The Coveteur party at Holt Renfrew to celebrate bloggers Stephanie Mark, Erin Kleinberg and Jake Rosenberg, who are best known for exposing the well hung closets of fashion elite. The style trifecta were in Toronto to unveil a photo exhibition, which runs at Holts on Bloor until Sept 8.

Media, best-dressed and fashion darlings came in droves (many of whom were seen earlier at The Bay’s Topman event) to air-kiss, compare shoes and salute the it-blog that makes us curse our own wardrobe.

“You can try anything on,” a Holts salesgirl said to me with a perky smile. With gimlet in hand, and cell phone in the other, I was apprehensive about trying on anything while intoxicated, lest I feel the urge to charge a month’s rent to my credit card. Instead, I   stalked the room ravenously looking for someone to talk to. I admit, I occasionally turned to Twitter to busy myself.

“I don’t want to ditch my mom,” said an old friend of mine, as we briefly reunited.

Conversations didn’t come easy but I did manage a wave to designer Lara Vincent, and rac boutique’s Faith Orfus. I wanted to compliment so many of the amazing sartorial choices but I felt intimidated. It takes a while to work up the nerve. Sigh, why are fashion parties so hard?

But then a kind hand reached out.

“Nice skirt,” said Jeremy Laing while gracefully pointing at my hips. He would know, because he made it.