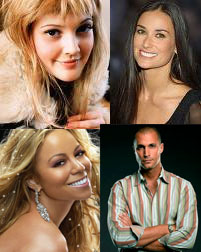 – Every boldface name in Toronto showed up for Shinan Govani’s Holt Renfrew bash to launch his book “Boldface Names”. We especially liked the mannequin version of himself in the main entrance.
– Bill Nighy said “Fuck, where the fuck? FUCK FUCK” when he couldn’t find his driver and was being inundated with fans at the InStyle party.
– 50 cent played at Panorama – top of the Manulife Centre on Monday night.
-Ed Norton pissed off media and declined to do the red carpet at Cheval’s “Ed Norton Presents” party – to celebrate film Leaves of Grass.
– Bono and Colin Farrel had a private party at Atelier that no media caught wind of.
– Duchess of York, Sarah Ferguson – was the heaviest hitter at the InStyle bash last night but crowds were going gonzo for Nick Cage….weird?
– Drew Barrymore, Ellen Page and Justin Long exit through the back door of Tattoo Rock Parlour and ditch their Whip It after-party for Ossington’s Sweaty Betty’s.
– Fans started lining up at 8AM to catch Oprah on the red carpet for film Precious. The crowd was nuts waving O magazines and cops held back fourteen lines deep of screaming fans.
– The Harry Brown bash at secret Bay Street station had us sipping Grey Goose martinis on the track with Clive Owen.
– Demi and Ashton showed up at new sushi restaurant Ame last night. Although no pranks, Kutcher had the crowd roaring with laughter.
– Supermodel Coco Rocha fluttered through the Holts crow in a Greta Constantine number that had her looking like a black swan.
– A glimmering and vampy Rachelle Lefevre walked the Holts red carpet in a gold mini impressing Twilight fans on Queen West.
– Along with George Clooney, there were goats at the Men Who Stare At Goats party on the Bridal Path. Mena Suvari was enamoured with the animals and stood their petting a goat for about twenty minutes. Clooney was relaxed and hanging with the peeps inside.
– Drew Barrymore held court on Park Hyatt roof patio while Elijah Wood just popped his head in – perhaps he got scared off by the hundreds of people pushing around trying to see him
– Bill Murray and Sissy Spacek hang at Lucien bistro on Wellington – two doors east, The Trotsky bash was going steady until the wee hours…Montreal smoked meat was flown in from Shwartz’s Deli.
– At the Windsor Arms Paul Haggis started an opening bid for the Casino Royale poker chips at $5000 for his charity foundation Artists for Peace and Justice
– The biggest buzz at the TIFF opening night party at Liberty Grand? How insanely thin Jennifer Connelly is.
– The Jonas Brothers were checking out the duds at Zara on Bloor, and Joe was spotted rocking some yellow jogging shorts on a run.
– Last night at Rolly’s Garage, Sook-Yin Lee requested that party go-ers come forward to share their orgasm stories
– Everyone expected Megan Fox to show up at Cheval last night – instead veteran rocker Carole Pope arrived
– There are giant paper penises on display at the ROM, an installation to enhance Isabella Rossellini’s short film series Green Porno; Scandalous Sea
– Jennifer Garner hit the IT gift lounge at the Windsor Arms to pick up some PLEASE MUM apparel for her wee ones
– SUCK party at the Phoenix Concert Theatre tonight will be a rock n’ roll blood bath
– Check back later today – will tell you where George Clooney will be hanging tonight….it’s not in Yorkville! MYSTERY!
– Demi Moore is said to have booked new upscale sushi joint Ame (Mercer Street – where RAIN once was) for a private party.
– Nigel Barker, our favourite shiny head photographer from ANTM, who can make us tingle with the slightest uttering of his British accent, is hosting some kind of protest/party against Canadian Baby Seal hunting on Sept 11.
-Apparently Amber is booked EVERY NIGHT in the fest for private parties! But attempt a sneak in late night.
-The Drake Hotel was full, so unfortunately Woody Harrelson couldn’t book a crash pad – but he tried.
-From the 10-17th the big Diesel party in Yorkville will host VIP hang time from 12-9PM. VODKA, SKINNY JEANS and CELEB WATCHING! You are welcome to attend too!
– Rolly’s Garage is officially a TIFF hot spot – and on Sept 10, will host the premiere after party for Sook Yin Lee’s film Year of the Carnivore, Sook Yin will be doing live performances with Buck 65
– Rumours circulating say that mega-babe Megan Fox is hosting her party at Maro Sept 10th
– Sat 12th, Holt Renfrew party is boasting 2 Super Models and 1 Hot Band – and has moved from Holts to the Burroughes Loft Space at Queen and Bathurst
-Cast from Whip It – Drew Barrymore’s directorial debut starring Ellen Page – will be whooping it up at Tattoo Rock Parlour for their raucous after party.

Got a hot tip you want to share? Or just witnessed something fun and crazy? Let us know: jenmcneely@shedoesthecity.com