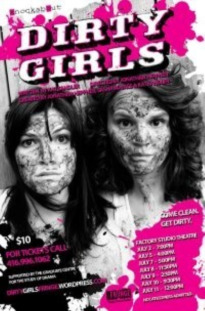 The Dirt on Dirty Girls

What makes a Fringe play great? It’s a question that I face every year, as I desperately comb play descriptions of singing sharks, Yiddish strippers and a “fresh perspective on teaching first aid” to find the perfect theatrical event. To make sure that you are never stuck in the back of an almost empty theatre, watching in horrified fascination as a lone man on stage repeatedly stabs a first aid dummy, this is my most basic Fringe suggestion: Look for productions that don’t take themselves too seriously. With that in mind, my pick of the festival is Dirty Girls. Originally an Edna St. Vincent Millay play about the two filthiest girls in town, Dirty Girls is a modern version that explores sex, marriage, virginity and what it really means to be a dirty girl. The plot involves is a king, a girl named Tidy, a girl named Slut and a marriage competition. To begin with, I’m really pleased to see a play that features two women playing opposite each other in a comedy, which I find disappointingly rare. More than that, however, it seems like a fun and funny screwball comedy that will appeal to both reality TV fans and aficionados of medieval cycle plays. Also, I’ve heard that there will be a pie fight. A PIE FIGHT! So while The Economic Crisis: A Drama, might be some people’s cup of very bitter tea, people looking for an accessible, topical comedy should check out Dirty Girls at the Factory Studio Theatre. Either way, you can buy your tickets at http://www.fringetoronto.com. Get out and see some shows, ladies!