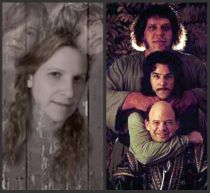 In between Perez getting his eye punched and the king of pop exiting the world, I met up with Risa Morris at Manic Coffee to discuss her upcoming play The Fever at Fringe Fest ’09.

With rage infused tweets from the Queen of goss against Will.i.am and media in a frenzy trying to figure out what prescription drugs Michael Jackson allegedly overdosed on, it feels as though trying to pull your attention away from the tabloids is about as easy as tugging a Boeing 747 with a piece of dental floss. However, like Montreal’s Great Antonio I’m going to persevere because, believe it or not, a one woman play can inspire a powerful, thought provoking response that sticks with you for years, alters your perspective and is arguably a far more visceral experience than let’s say – twitter or CNN.

First things first, do you remember the short, lisping, hot tempered Vizzini from Princess Bride? Well this master of the wits, Wallace Shawn, also wrote The Fever. Inconceivable! No – really. Not a fairytale about six fingered men or wrestling warthogs, rather a very poignant play about a woman visiting a foreign country to find herself-but instead, she finds herself lost, questioning her very understanding of the world. In a fever-induced hallucination she takes the audience with her as she struggles with what it means to live in a privileged place, knowing the realities of life in the developing world. If you aren’t brought to a time when deep thought was confused for malaria, at the very least you will squirm.

We admit we scan a lot more videos on Youtube than attend plays. In a world that is consumed with the instantaneous, why should we go see theatre? “It has always been the job of the theatre to make us question societal values, to make us question what is happening now – and good theatre makes us question and makes us feel.” Morris continues “…There is nothing like a live performance, because you are part of it…and you can’t turn it off, go to the washroom, because it is alive and even your moving can change what happens on the stage.” McLuhan and Aristotle would concur.

Also the drama teacher at Toronto’s esteemed Havergal College, Morris tells her students, “If you are going to have twenty minutes…of my time, you better say something.” If she practices what she preaches, then we can expect to not only be moved by The Fever, but respond to it both emotionally and intellectually, left with lingering questions to be sorted over wine, or at the very least – infuse a drunken debate.
The Toronto Fringe Fest is known for its range of theatre, and there’s no denying that at times it can feel like Russian Roulette. Morris knows that “…you have no idea whether it (a play) is going to be good or not, but a lot of the stuff is fantastic. You go and you have a good time or you have a terrible time and then talk about why it was terrible – but there is always something to talk about.” Like us, she too would rather be moved to anger then remain stagnant.

Morris didn’t up and decide to do this play, but was initially asked to perform it for an existential class at the University of Winnipeg. With little time to prepare, Morris made use of every minute on the TTC to practice her lines, causing many a raised eyebrow and uncomfortable stare. If not riding the rocket and maniacally monologuing – then she sang spirituals, finding the deep rumblings of “Go down Moses” to bring forth the feeling of a hot hallucination. Try it at home!

She lets us know that despite the exercises to find a character, the only real way to play somebody successfully is “to not judge them.” (Maybe she should give some pointers to Christian Bale )

So we ask, “Do you think empathy is the most important quality of a good actor?”

”I think it’s the most important quality of a human being.”

And it is with empathy that Morris began to incorporate philanthropy into her work. There was a time when she was busking on the street to pay for school, but her performances now are done so out of passion, not need, and therefore it has always been her mandate to donate when she can, choosing a charity that fits with the theme of each play. It was fitting then, for The Fever, that she chose
Doctors Without Borders . She explains that the play “is all about the existential question ‘what can we do?’ and I believe that Doctors Without Borders is an organization that does something. They have no political agenda – they just do what needs to be done. Then they come back and say ‘this is happening in the world, what are you doing about it?’”

We now turn the question to you, what are you going to do? Why not take a break from Perez, TMZ and ET and do something different, i.e. meaningful, for a change. Check out The Fever, you will not only be engaged and moved but following, you can relish in riveting discourse and leave with the knowledge that the price of your ticket will directly help those in need..

If the play accomplishes what Morris promises, then it will force us to consider our crazy world and shake up important questions that far too often get overshadowed by all the smut and gawk. Theatre prevails!