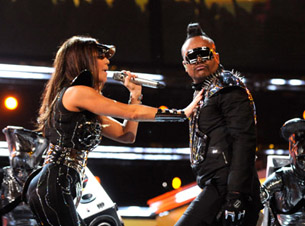 The Grammys felt like a musical parody of The Grammys

Maybe it was the circus theme or that women have decided to wear no clothes or perhaps that we were all supposed to have a pair of 3D glasses at our side, but The Grammy’s last night felt like an over the top musical parody of itself. Oh wait – no it was definitely the Black Eyed Peas who truly kicked it into the stratosphere of mockable ridiculousness with their dorky space dance. What was presumed before was confirmed last night – the Black Eyed Peas target market is 11-14 year olds, they are like the DoodleBops of pop.

From the get go this awards show was freaky – beginning with Lady Gaga and Elton John covered in dirt(??) John had a sixteen pound glitter earring and Lady G exposed a front end wedgey in her sparkly emerald power suit. What I really want to know is where does she get her brazilian?  If the bodysuit had been any tighter, it would have lined up on the inside lane of her labia – daring. I did enjoy seeing her bum rumble on the bench during a rendition of Your Song that neurotic Don from Sesame Street would have a hard time trumping. However, this little diddy was nothing compared to Pink who wore a nude body suit that was vajazzaled and titazzled – WAIT that’s not all – she hung from the ceiling – twirling, singing, getting dunked in water and doing Cirque du Soleil acrobats that had her looking like a dangling worm squiggling out of a cocoon. Kudos to her incredibly sculpted body, it was also fun to consider what people thought when getting water sprayed all over them as she flew around the room soaking wet.

I personally enjoyed Beyonce’s performance wherein she grabbed her imaginary dick and then did some serious sexy squat dancing, kept wondering what her and Jay-Z must get up to in the bedroom. Hot. Taylor Swifts performance was probably the worst in the batch, she seemed to have a hard time matching a note with legend Stevie Nicks. Oh well – she’s cute with squinty eyes so we will give her a hundred awards.

The 3D Michael Jackson tribute was the weirdest. Twitter was jammed with people bitching about how their screen was fuzzy, their Avatar glasses didn’t work or how they felt like they had just come from an optometrists eye exam. Beyonce looked really happy in her glasses – but we couldn’t help but wonder – if you are there in person – isn’t it already 3D? Who knows – who cares. Bon Jovi is looking totally fuckable at age 47 and Tarantino either snorted a line (or six) before his big intro or….actually no, he must have because there is no other way to explain such enthusiasm.

I had waited all night for the Eminem, Drake and Lil Wayne smack down but then %60 of it was bleeped due to explicit lyrics. Instead I Wikepedia’d Drake. I am well aware that his break-out role was as Jimmy in a wheelchair on Degrassi but did you know he is 1/2 Jewish and a Forest Hill Collegiate drop out? During the performance of Forever, Jamie Foxx mouthed the lyrics in the audience like a crazy obsessive fan and this was after he ran around the stage as some angry lieutenant meets the Peanut man. Yes, this was a circus but no performance from our threesome-loving yummy mommy – it would have been too embarrassing to see Britney’s outfit again. She looked like a middle aged chain-smoking hooker from North Bay….or something like that.

I was sort of confused why there were more close-up shots of Stephen Colbert’s fair-haired daughter than the fame monster herself but wasn’t quite as vexed as every gay boy from here to Kansas who trended #gagagotrobbed on Twitter.

Parody or not – it was solid entertainment minus all the country bullshit that had us up in the kitchen trolling for snacks. Although Taylor nailed the big one, Beyonce received a whapping six awards – a powerhouse who rightly deserves the glory….we only wish Kanye was there to make an ass of himself again. Ha!