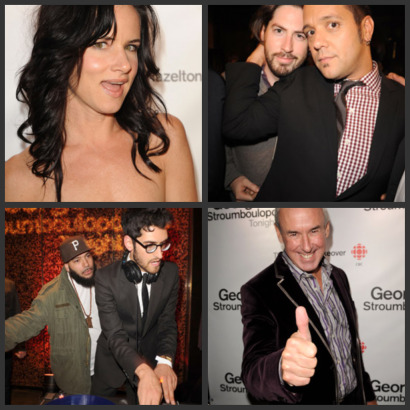 The Hazelton Takeover – where Juliette Lewis, David Suzuki and Jason Reitman all show up to celebrate with Strombo.

Who would have thought CBC’s Hockey Night In Canada host Ron MacLean would ever be at a party where Chromeo was spinning? Well, last night this magic happened at The Hazelton Takeover – or the bash to celebrate George Stroumboulopoulos Tonight, same sorta format as The Hour, chopped in half. (So thirty minutes, hence the importance of name change.) If there is one dude in Canadian entertainment who can bring all types together it is Strombo, and that he did. Insert sharp whistle sound – MIXED BAG ROLL CALL: Actor Juliette Lewis, rapper K’naan singer/songwriter Chantal Kreviazuk, basketball phenomenon Steve Nash, director Jason Reitman, dragon den fire blower Kevin O’Leary, Designer Guys Steven and Chris, Co-director of TIFF Cameron Bailey, heck, even David Suzuki dropped by the Yorkville hotel. If I tried to imagine the most diverse dinner party, I don’t think I could compile this range of talent. The shindig was so packed that even George had to fight the crowd. “Ok – trying to get into the party but literally have to cut my way through with a Bowie knife….” he tweeted. However, the more interesting fact we learned was that mega athlete Nash can’t ice skate without pushing a chair. Ha-ha! In conclusion, we aren’t exactly sure how George Stroumboulopoulos Tonight will be different from The Hour, but safe to say we can expect even more A-listers in the hot seat for one-on-one’s with Bono’s favourite question man. The MuchMusic VJ who captured our hearts on The New Music over a decade back still has his rebel boy good looks, and we are excited to watch him launch a new chapter.