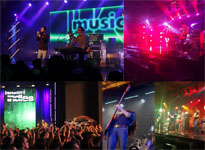 The Indies at CMW 2012 – The Sheepdogs take all the awards, Treble Charger looks old, Rich Aucoin steals the show, and Passion Pit sends us to bed happy

The 12th annual Independent Music Awards were hardly one of those stuck up, penguin-suited award shows – you got Fucked Up’s Damian Abraham making faces for the photographer in the media room, The Sheepdogs members appearing to have a beard-growing contest, long multiple-song sets from Dan Mangan and miles and miles of plaid.

Despite The Sheepdogs snagging (almost) every award in sight including Group of the Year, Favourite Rock Artist of the Year, Favourite Single of the Year and Favourite Live Artist/Group of the Year, it was certain the audience left with only one “Favourite” on their minds: Rich Aucoin. If you don’t know this man, Google him. Just when you thought The Indies performances couldn’t get any better – with sets from the Pack A.D., Young Empires, and  Treble Charger, Rich Aucoin went all out. Confetti? Strange videos of goats and flashing cartoon images? A rainbow parachute? Sounds like a children’s birthday party. And with Rich Aucoin’s ridiculously fun brand of pop electronica (think Dan Deacon), this new winner of the SiriusXM Emerging Artist of the Year stole the show from headliners Passion Pit, who closed off The Indies with a brief four-song set as Tokyo Police Club’s keyboardist Graham Wright joined them onstage. At least Passion Pit ended with my favourite jam “Sleepyhead” – which is what I was by the end of the night.