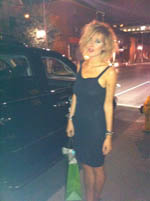 The Ladies who do TIFF: FASHION Magazine's Sarah Nicole Prickett gets her hair fucked up for the Kate Spade cocktail

Foxier than Megan Fox, SNP describes her TIFF look:
I’m wearing a very feline, very 90s, very very Versace dress I got on sale at LAB Consignment. I always wear the same shit on my left wrist, and on my right I have one of those cheap silver snake things you can wear a million ways. It broke, whatever. Shoes are last year’s big platforms from ALDO.

How-to master the perfect morning after hair and come hither eyes: So I went to this primping suite with Randi Bergman. The stylist from Sally Hershberger completely understood me: “So you want your hair to look fucked, then?” YES. HARDER. Then I got Smashbox makeup from some gem of a woman. I really never wear coloured eyeshadow, I hate it, but it’s not like I’m really “me” at anything where there’s a red carpet anyway. So I got enormous teal eyes. I felt like a stripper or maybe a minister’s wife in Houston.

The event where this photo was snapped: I was leaving the Kate Spade party, which was really pretty and proper. Everything slid downhill from there. We were getting into Randi’s loaner Cadillac, and my fave Tara took this on her iPhone.

Favourite part of the night: Definitely the time I fell down while standing.

Best overheard quote: Those girls aren’t going pee in there.

OMG…the celebrities! Bryce Dallas Howard hosted the Kate Spade thing, and apparently Jessica Chastain was there too. Later, much later, “The Weeknd” was at Goodnight. Sorry, but it’s so funny when people call him “The Weeknd.” He’s not really famous. Maybe fame-ish.

The swag: A swag bag, literally, at Kate Spade. It’s patent and croc-like and my mom will love it.

How did the night end?
N/A