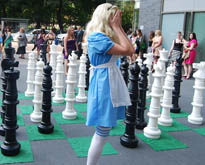 The National Ballet heats up with the Mad Hot Gala

With an Alice in Wonderland theme, the atmosphere at the Mad Hot Gala on Tuesday June 21st can only be described as whimsical. The crowd was diverse; young members of The National Ballet’s Dance Break program competed for the best hat and rubbed shoulders with elder statesmen in tails, top hats and bunny teeth. Toronto society ladies (who cautioned the SDTC photographer not to get last season’s shoes in their picture) mingled with ballerinas who had just shucked off their tutus. Everyone was celebrating Alice and the fundraising efforts of the National Ballet.

The evening began with Karen Kain’s address to the audience in a voluminous red gown from the Four Seasons Centre stage. She introduced the program of ballet pieces we were going to see, a showcase of amazing dancing. A very modern balletic interpretation was accompanied by a violinist right on stage. Veteran Principal Dancer Greta Hodgkinson danced the Dying Swan in full feathered tutu. To close the performance, excerpts from the current Alice in Wonderland production delighted the audience. The Cheshire Cat sequence set giggles running through the crowd as he appeared and disappeared in a fantastic illusion and the hookah-smoking Caterpillar seemed to be inspired by Bollywood before transforming into a grand 18-legged beast.

The crowd poured out of the theatre for the reception that followed. Long tables groaned under the weight of candelabras, teacups and finger food a la Mad Hatter’s Tea Party. Guests sipped their White Rabbit cocktails (delish!) from dainty William Ashley cups while a procession of Alices played croquet with flamingos and a life-sized game of chess on Osgoode lawn. And then there were the hats. A nest of birds, a hat constructed of cards and a large black floral piece that looked like a Haus of Gaga export were all on display, floating through the crowded room and rose garden outside. Things got “curiouser and curiouser” as the amazing party unfolded, and were capped off with a gift bag filled with tea and goodies from MAC. It was a great night to support one of Toronto’s greatest artistic assets; our National Ballet.

Alice in Wonderland finishes its performance run this weekend but a very limited number of rush seats are available (be sure you’re not late for that very important date!). If you miss seeing the show this time, be sure to fall down the rabbit hole and watch the videos of this unbelievable production co-produced with London’s Royal Ballet. The Dance Break Program is a membership for 16-29 year olds that’s free to join and give you the opportunity to purchase $30 Orchestra seats to National Ballet productions!