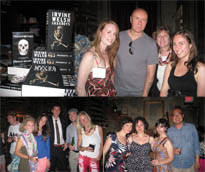 The Society and New Collection present Irvine Welsh in conversation at Goodnight. See Ecstasy at the Royal Cinema June 14th

It was a distinctly subterranean affair Tuesday night at The Society’s most recent event, a meet and greet with Irvine Welsh. Held at Goodnight, (431 Richmond St. W.) an expensively decorated hole in the wall, bar staff understood the meaning of a stiff drink––doling out occasional tequilas and Old Fashioneds, while guests sipped on cocktail-appropriate reds and whites.

Giving members the opportunity to ask questions and mingle with the Scottish author, the event also introduced us to a brand new type of young patron’s circle––the New Collection. Members will not only raise funds for the Toronto Public Library Foundation upon joining, but will also be privy to at least three exclusive salon-soirees per year. If you enjoy your mixers with a side of intelligentsia, it’s certainly worth a look into––especially considering how embattled our libraries have been under the rule of, point-blank, the worst mayor ever.

“Anyone who tries to close a library is a fucking asshole,” Welsh breathlessly sputtered. Emphatic nods all around. He spoke of his childhood, just outside of Edinburgh, and the importance that libraries had on building his fascination for the fictional. “It was great to go somewhere else,” he burred, “If people are denied that, it’s a tax on the imagination.”

A premium tax, it seems.

Welsh is keeping himself busy these days; with an HBO pilot in the works, as well as continuing to produce Hollywood projects, it’s a wonder that we could even pin this nomadic author down. He graciously entertained eager questions from guests, as well as indulged my own.

“If you could set any historical figure on a raft and send them anywhere, who would you send where?”

“Hitler.” he said without even blinking, “To Antarctica.”

For more Welsh, there will be a screening of his film, Ecstasy, on Thursday June 14th at the Royal Cinema at 7 pm as part of North by Northeast.