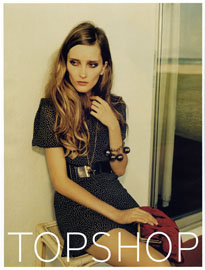 The Topshop-shaped void in my heart is about to be filled. Torontonians, behold the British line’s Canadian debut on Ossington.

After last summer’s London trip, I spent hours (it’s massive, okay?) roaming the monstrous Topshop in Oxford Circus. While perusing through girly floral rompers, neon-hued heels and whimsical frocks, there was only one question going through my head.

Why the F#@% is there no Topshop in Toronto?

Yes, Holt Renfrew once carried Kate Moss’s Holiday collection, but that was in 2007. In the past year, rumours have been circulating Toronto that Topshop was arriving; in 2009, when owner Philip Green told the Toronto Star they would be opening a Canadian store within nine months, then The Bay announced they would house the line. In March of this year we thought we had made a groundbreaking stride with Topshop’s announcement that they would begin shipping online orders to Canada.

Enter Jonathan + Olivia, the Ossington boutique that takes urban chic to a painfully hip, wallet-depleting level. They’ve cleared out an 800 square foot space in the back of the store to give the Topshop summer collection its first Canadian home, right in there among its APC and Alexander Wang. J+B owner Jackie O’Brien, who we can only assume is currently pink with delight about the jackpot she’s just hit, told NOW “I don’t want to sound like a geek but I’m really excited to exclusively bring Topshop to Canada.”

Dipping their toes into the Canadian market before taking the plunge is similar to what they did in New York, where they sold their collection at Opening Ceremony before opening their two-storey megastore in SoHo. It’s smart business on their behalf, and it’s a fresh way to bring in their line – there are only 11 other independent shops worldwide that carry Topshop.

Veering away from my (perhaps over-enthusiastic) glee, there is one negative aspect to such a desired chain hitting Toronto – it becomes, well, just another chain store. H&M, Sephora and Forever 21 were once these special destinations that always accompanied travel tales of roaming America or Europe for cheap fast fashion. Now, we’re all wearing the same shirts and the same mascara and these now-local destinations have lost that exotic va va voom. However, before I let this bum me out, I should probably let the collection actually launch. And after all, we’ll always have Uniqlo.