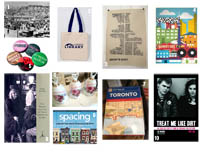 The Urbanist Gift Guide! For the city navigator who loves Toronto

Toronto Star photo archives
Have you been to this site? Over 1500 categories of photos to surf through that you can purchase as a print, plaque or framed. Whether you love seeing how the city was built or want to hang a moment in time in your living room, this site captures Toronto life since 1894.
Browse now.

Toronto Public Library Tote
Want to show your love for our city’s libraries? This cute tote has become so trendy that our libraries can hardly keep them on the shelf! While half the stylish girls in this city run around with striped Bay bags, the other half wear their support to our public libraries.
$3  at your local library branch.

Type Maps
Illustrator Dave Murray hit the jackpot when he started mapping Toronto neighbourhoods with cool font. We have an Ossington strip in our living room, and here is a Kensington one that reminds us how vibrant and special this patch of the city is.
$40 available at Telegramme

Moxy Creative Touristique Print
In pretty pastel, this cool print captures some of our favourite landmarks like OCAD, The Gladstone, The Drake Hotel and Honest Ed’s. We think it’s a nice thing to hang on your wall.
$30 available at www.moxytouristique.com.

Rob F*cking Ford Magnets
Leave it to Spacing Magazine to come up with these stylized punchy magnets as a big FUCK YOU to our mayor. $15 for 5 or $4 each. A neat-o stocking stuffer for the bike-riding Atwood fans.
$15 for 5 or $4 each available at Spacing.

Toronto City Walks
Even for someone who has lived here all her life, this gift truly is the gift of adventure and exploration. You get to know a city if you walk it.
$18.95 at The Drake General Store.

The Death and Life of Great American Cities by Jane Jacobs
You can thank urbanist Jane Jacobs for the fact that Spadina didn’t become a major highway, disturbing all in its path. Published in 1961, this was and still remains a hugely influential book for city planners, here and afar. Jane was a trailblazer and although widely known, her home was in Toronto’s Annex neighbourhood.
$15.21 on Amazon.

A subscription to Spacing Magazine
There is a reason this local mag keeps getting awards like Magazine of the Year: It rocks.”The magazine uncovers the joys, obstacles and politics of Toronto’s urban landscape by cutting through the cynicism that often pervades any discussion about urban issues.” It’s a pleasure to read but also forces us to deeply question all the elements that make our city livable and lovable.
A 1 year subscription is just $15! Get it now.

Treat Me Like Dirty by Liz Worth
Wanna go back in time to Toronto in 1979? Author Liz Worth chronicles the gritty punk scene in Toronto between 1977 and 1981. What was Queen West like then? Go inside the dark and smoky clubs that helped shape this period and gave Toronto its beloved edge.
$39.99 on Amazon.

See Our Other Gift Guides Here.