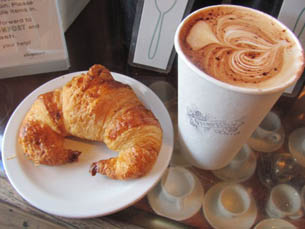 This one time, I decided to quit drinking coffee

For no real reason. Well, to be fair, I decided to quit drinking coffee for lots of small, good reasons. I’m an insomniac, and while my doctor assures me that my particular sleep issues have nothing to do with caffeine, I figured cutting it out couldn’t hurt. I’m also not a fan of the anxiety, headaches, and other joys that come along with caffeine addiction. But mostly, I just wanted to be able to lie around in bed on Saturdays, or head out to work, without desperately craving a double latté. I didn’t like being a slave to the bean. Plus, people kept saying I couldn’t do it. So I did. So there.

If you’re thinking of quitting, here’s some info: coffee is rough on your stomach (my doctor recommended I switch from americanos to lattés to help with this, the milk makes the coffee go down easier), it can affect your sleep, especially if you drink it after 2 pm, and can increase anxiety, if you’re prone to that sort of thing. But it’s also an antioxidant, and has been suggested as a potential factor (that means there’s no proven connection, but a correlation) in decreasing risk of depression, Alzheimer’s, some cancers, diabetes and Parkinson’s. But remember: coffee doesn’t prevent these things, it’s just a possible factor in prevention. If this is a big part of your decision, read as much research as possible. I decided that being free of the cravings was worth it.

The first few days? The worst. I was super clumsy, spacey, and just generally confused. I thought the initial caffeine deprivation would feel something like PMS, but instead I felt bleary and slow, like my head was in a fishbowl. Kind of like how you feel when you have too much caffeine. Irony. I was knocking things over, moving at about a third of my usual pace, and needed to be told things several times before they sunk in. All in all, a delightful employee. (Sorry, Jen.) I was also hungry, like, constantly. The only saving grace was that I only had one day of caffeine headaches. Solace.

After the first week, things took a turn for the cranky. I had zero patience for anyone or anything. But things started to look up when I had an encouraging chat with my favourite barista. She handed me a croissant and asked if I wanted my usual order. When I declined, she told me she, too, had quit drinking caffeine, and was feeling great for it. It was encouraging. I decided to stick it out. Another little nudge of positivity? Getting checked out at the walk-in for a cold (it’s the lack of coffee, I tells ya! I’m allergic to NOT BEING CAFFEINATED!) the doctor asked if I was a “caffeine user.”

About a month into this fool’s errand, and nary a positive side effect in sight (okay, yes, I was less anxious, whatever, fine.) I tried my first decaf latté. What a crushing disappointment,  to be standing in an independent coffee shop, salivating over the delicious smell of roasting beans, percolating drip, brewing espresso, and, hands curled greedily around a steaming mug, lips moments from perfectly-frothed milk, be rewarded with a watered-down version of my favourite fix. Decaf does not taste like full-strength. It just don’t. Sorry.

But I muddled through. I discovered that, in iced drinks, the differences between decaf and caffeinated are less noticeable. I started bringing oranges to work, and occasionally snacking on dark chocolate. And I decided that I enjoy not being addicted to something, even something as innocuous as caffeine, which in moderation is actually good for you. It’s nice to not have to stop when I’m running late for work, or become murderous in a brunch line because I haven’t had my coffee yet. I don’t crash mid-day anymore, although I’ve had to adjust my eating and snacking strategies somewhat: I still have decaf often, when I’m craving a boost of energy, for a sugar fix more than anything. But generally, I feel a bit more with-it all day long, and have found that I’m less tired at the end of the day. I’m also drinking more water, which feels great and is great. And I’m saving money, because not only am I not shelling out for coffee, I also have more time in the morning to make myself breakfast. Hoo-rah!

I still feel a physical yearning every time I walk into a coffee shop (because I love coffee. I really, really love it), and I feel like a traitor every time the word “decaf” escapes my lips (I swear I see a tik of judgement coming from whoever’s taking my order), but all in all, I’ve stuck with it for three months, and I don’t plan on going back anytime soon.