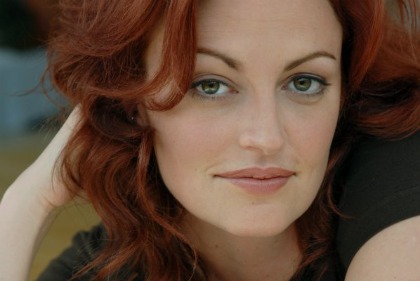 This Week in Inspiring Women – Katie Boland interviews Claire Brosseau about her Manbattical (No men for one year!)

Last week, I spoke to a class of future filmmakers at U of T. The class is taught by Semi Chellas, one of Canada’s foremost screenwriters, a woman I really admire and am lucky to call my friend. When she asked me to be a guest in her class, I jumped at the chance.
She had also asked a few other actors to speak, some who I knew and some who I was happy to meet. When we were going around making introductions, Semi introduced Claire Brosseau, a woman whose face I recognized but who I’d never met.
It made sense that I recognized Claire. She has travelled all over the world doing stand-up comedy, theatre, musicals, films and television. She has been a featured comedian on “Entertainment Tonight”, “The Strombo Show”, Much Music’s “Video On Trial”, “The Laugh Attack” on XM radio, CBC’s “Q with Jian Ghomeshi” and the daytime talk show, “The Gill Deacon Show”. She lives in Toronto, working as an actor, comedy writer, singer, and stand-up comedian.
“Amongst Claire’s most exciting achievements,” Semi said, “is her current year-long Manbattical, that she’s writing about in Now Magazine.”
“Wait,” I said, “Manbattical?”
“Yes. One year without men.”
One year? Without men? WIthout sex? Without kissing? Without flirting? WITHOUT EVEN INTERNET STALKING THEM?
“Yes,” said Claire. “It’s been…interesting.”
I was impressed by Claire and thrilled by her courage. Could I go a year without men? Could any of my girlfriends? I’m with a good one now, but there were years I wasted on men. Although I’ve learned a lot from everyone I’ve been with, when I think of the energy I spent being boy crazy, it makes me sad. Why was I so scared to be alone? Why couldn’t I just give up when it was obvious we weren’t meant to be? I would be lying if I said the thought of just quitting men all together hadn’t entered my head, but I never thought I could really do it. It’s wrong, but I think most women I know rely on men to feel pretty, to feel wanted and to feel good about themselves. How would our lives change, if we eliminated the opposite sex, and all the glory and grief that goes along with them, all together?
After the class, I walk up to Claire and immediately ask her if she’d be interested in being interviewed.
She agrees.
To research, I read her blog. Here’s what she has to say, in her own words, about her Manbattical:

“I’ve achieved a level of success to be proud of, but a combination of luck and laziness, have rendered my 33rd year to be somewhat disappointing. I thought I’d be done waiting tables at this age. I thought I might be married. I was hoping to have a child. On the other hand, I have very little responsibility, can sleep all day, travel (at any given moment), party, and pretty much do anything I feel like. It can be pretty great. Some of you may find my lifestyle caliginous. Know this: I have amazing friends, I do exactly what I love for work and for play, am close to my family (geographically and emotionally), live in a cute little apartment with the most awesome cat. Do I sound defensive? I guess that’s what I’m trying to figure out. I’ve made a few questionable decisions in the past few years. Mostly when it comes to men…This project scares me. A year is a long time to feel lonely. One of my goals, I suppose, is to embrace loneliness. I also really want to have a baby (at least one) and giving up on meeting a perspective baby-daddy at 33 years old seems like a long time. The hope is that it won’t just be year wasted on heartbreak and disappointment. Again, important life lessons to matriculate, but I’ve had enough of it for a while… Now is the only time where I could take a year to focus only on myself. It would only get more complicated as I get older. It really frightens me. And in my life so far, I’ve found it crucial to face what terrifies me.”

First of all, I was really high, & I didn’t think it through. But I knew it was a great idea, & something I needed to do.

2. You’re a wonderful lady who has obviously done a lot with her life, but did you feel you used a lot of you energy with men?

YES! I think about dudes all the time. They are like energy-vampires for me. I don’t blame them, I blame their penises. I say I’m “boy-crazy”, but really, I’m just “penis-crazy”.

3. How has your image of yourself changed, with no men in the picture?

Honestly, my image hasn’t changed, except for the fact that i no longer need to wax my bikini-line, which is obviously AWESOME.

4. What are some of the difficulties you didn’t expect?

I didn’t expect it to be so difficult. I thought xmas, new year’s, family get-togethers… but not the day-to-day. I can’t even MAKE-OUT with a dude. No excitement coming from men is very creepy for me.

5. How has your life changed without men, for the better?

6. How do you think this will change your perspective on men and your future relationships?

7. What advice would you give younger women about relationships? Sex? Men?

There’s a lot to be said for holding out & being patient. I’ve never had more dudes interested in me than I do right now. It forces you to actually get to KNOW the person before you (think you) fall in love with them, or start boinking them. Also, go for rich dudes. Seriously. Listen to a Joan Rivers record & hear what she has to say. She’s a genius.

8. What do you hope the outcome is of your manbattical?

I’d like to come out of this with my hymen sealed back together. Just kidding. I’d like to figure out how to love myself, & not depend on a man’s opinion of me to feel validated. Oh, barf. That’s sounds so gross & cliché. But it’s true. I hope I learn something that will stick with me. It’s not been easy. I’ve come very close to ruining this project up. I hope by the end i can realize that men aren’t the center of my universe.

9. What have you learned about yourself without men?

10. Are you counting the days until it’s over? Or are you enjoying the time to yourself?

Unfortunately/fortunately- I’ve met someone (in the last month) who I legitimately care for. He’s everything I look for in a partner, & I’m terribly attracted to him. So, yes. Right now I’m counting down the days. I resent that. I want to enjoy my time alone, so lately, it’s a constant struggle. I think it makes it interesting for the readers, but it’s hell for me.

Read Claire’s blog, chronicling her Manbattical. You won’t regret it.

Next Week—Women On Screen Out Loud: The Wrap Party To Spotlight Women in Entertainment