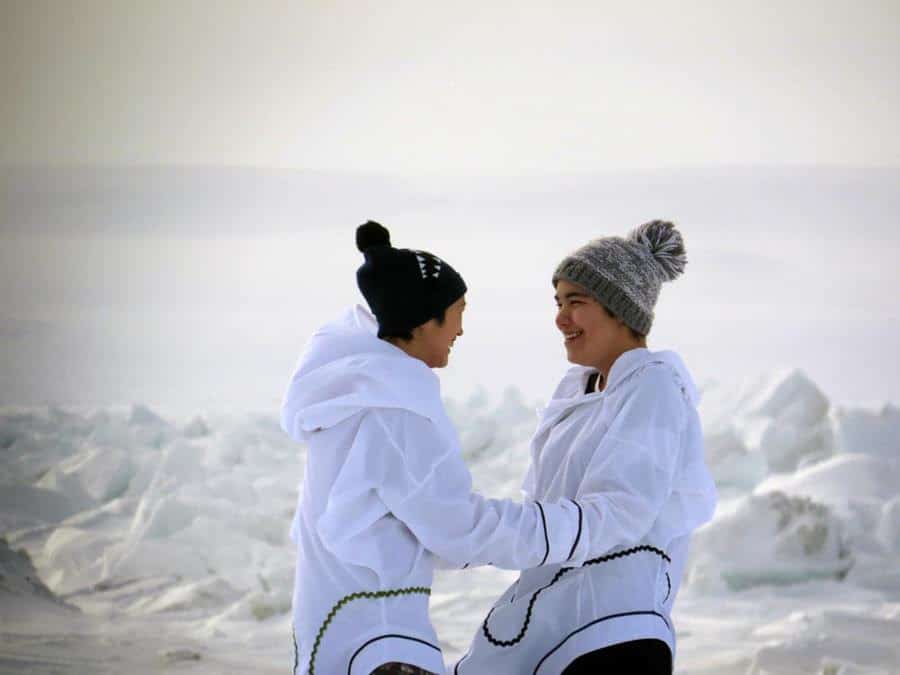 Manon Chamberland & Eva Kukai are the teen co-directors and protagonists of the short film Throat Singing in Kangirsuk, which made its world premiere at the Sundance Film Festival last month.

We caught up with Manon and Eva this week.

SDTC: Where were you born & where do you live now?

What was the inspiration for the story?

The inspiration of the story is how our culture was in the late 1900s. They throat sang in an igloo, imitating the sounds of animals or the nature, while waiting for the men who went hunting for food. It started off with our grandparents; they taught us how to throat sing to show the next generation that our culture is not dead and is very much alive in different forms.

What themes are associated with this film?

EVA: The themes that overarch in our film are related to stories that connect land, animal, and person.
MANON: Other themes that are drawn from this relationship are aspects of language, identity, and culture.

Where was the film shot?

How long did the shoot take?

The shoot in its full took approximately one month from idea to completion. We made it thanks to a workshop offered by Wapikoni.

Was there anything particularly challenging while creating this film?

The most challenging aspect of creating this film was the physical environmental conditions in which we filmed. The wind was really freezing to film in.

Anything in particular that we should know about your soundtrack?

EVA: Our soundtrack is our throat singing that was recorded in town. In our culture, throat singing is a form of song where we imitate the sound of nature or animals. It is a traditional game between two women, where we try to make each other laugh! Throat singing was also used as a way of getting newborns to fall asleep in the mother’s amautik.
MANON: Throat singing also has a history amongst our people to be a form of self-expression (i.e., stress, hungry, loneliness, happiness) and especially during arranged marriages for women. There are many stories surrounding throat singing.

Anything we should know about this film?

We wore the clothes that our people used to and still wear today, but no notable features of art, such as sculptures and paintings, were used in the film.

What do you hope the audience takes away from this film?

We hope that the audience walks away from this film with an understanding of the resilience of our people through our ancestral knowledge and story.