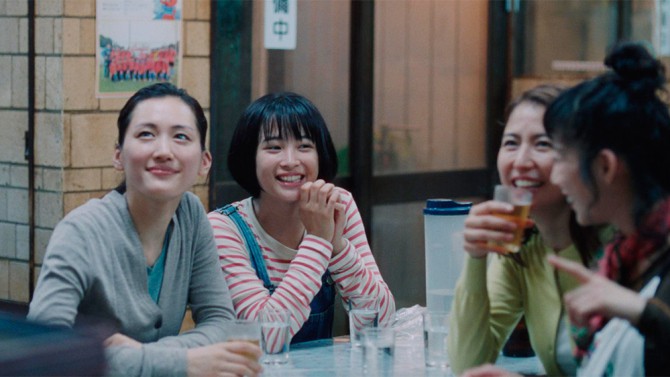 Our Little Sister is a Japanese feature film directed by Hirokazu Koreeda. It is a winsome movie about healing, and young women in their twenties coming of age by way of nurturing a teenage girl.

It’s a narrative we see a lot of in cinemas lately. Keira Knightley does it in the 2014 film Laggies, where her character befriends a high school student after buying her alcohol at a liquor store. Just last week, I watched Noah Baumbach’s new film Mistress America, where Greta Gerwig’s character introduces her new eighteen-year-old step sister to New York City, eventually prompting Gerwig’s character to change her life course in a drastic way.

Our Little Sister, however, diverts from previous stories of working through extended adolescence by bonding and mentoring girls currently working through real adolescence. It does this by complicating the narrative with an overlay of family drama.

Our Little Sister is the story of three adult sisters whose estranged father dies, leaving his much younger daughter, fifteen-year-old Suzu, an orphan. Suzu is the daughter of the woman their father left his three older children to be with, prompting their biological mother’s breakdown. This pivotal breakdown led to the older sisters’ mother running away years before the film’s story beings.

When Sachi, the eldest sister, hatches the idea to take in Suzu, it looks as though there could be less-than-pure motives. At one point, her sisters accuse her of wanting to raise Suzu to torture her mother, who sees Suzu as a reminder of the affair that ended her marriage and upended her life.

Ultimately, the bond between Suzu and her three older sisters becomes so profound it eclipses all of their familial resentments and grudges. These three sisters work together to raise a young woman to feel loved and secure, resisting their social expectations to find husbands and start new families of their own.

Our Little Sister is the story of a nontraditional family that shows how love can change people, make them stronger, more forgiving, and above all, happier. I highly recommend it.

Now please excuse me while I go call my own little sister….