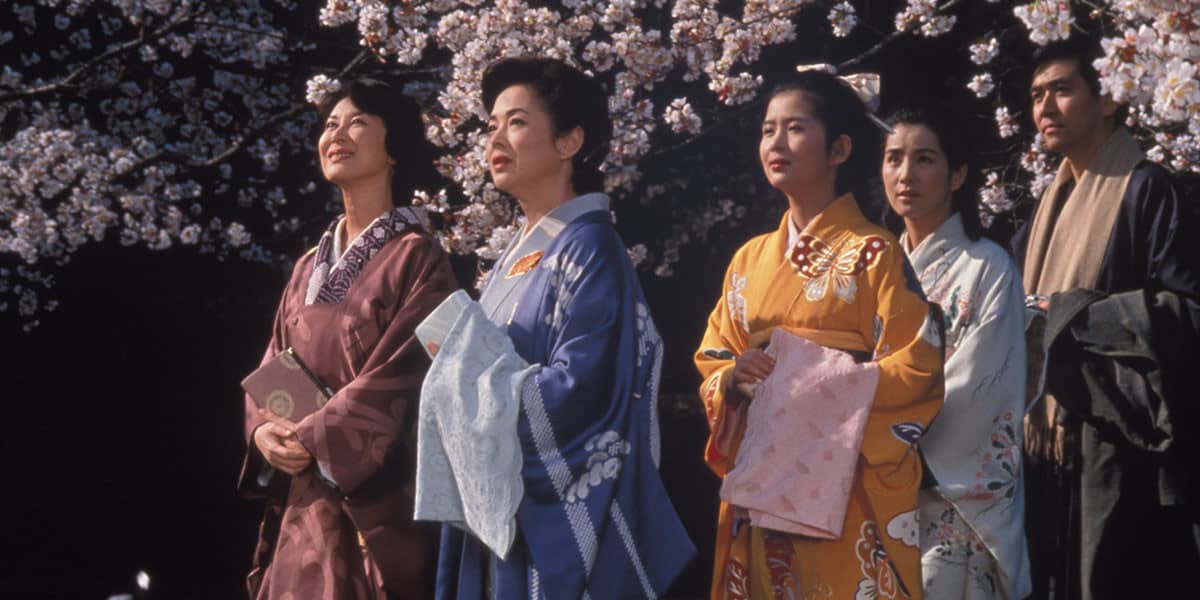 Spend the summer in Japan without leaving the city! From July 5 to September 1, TIFF is bringing Japan to the big screen with an expansive collection of titles from the most celebrated Japanese auteurs—Mizoguchi, Ozu, Kurosawa, Ichikawa and Naruse—as well as a few rarely screened yet undeniably gifted directors.

From samurai epics to intimate family dramas, there is something for all film or travel aficionados in this grand tour of Japan. Here are some of the screenings we think you should check out:

Ugetsu, dir. Kenji Mizoguchi | Japan 1953 | 96 min. | PG | B&W. Widely regarded as one of the greatest films in the history of cinema, Mizoguchi’s masterpiece takes place in 17th-century Japan, where two men—a peasant who yearns to become a samurai and a potter who is seduced by an exquisitely beautiful woman who turns out to be a phantom—allow their weakness, greed, and pride to lead both themselves and their faithful wives to ruin. Friday, July 13.

The Makioka Sisters, dir. Kon Ichikawa | Japan 1983 | 140 min. | PG | Colour | 35mm. Aglow with cherry blossoms and brocade kimonos, The Makioka Sisters was the greatest success of Kon Ichikawa’s late career. Set just before the beginning of the Second World War, this plush saga recounts the story of an Osaka family that is trying to marry off one of its four daughters, the clan’s privilege and insularity allowing them to focus on domestic issues and the waning rituals of courtship while ignoring the portents of cataclysm all around them.

Late Spring, dir. Yasujiro Ozu | Japan 1949 | 108 min. | PG | B&W | Digital. A young woman, Noriko (Setsuko Hara), has cheerfully forsaken marriage so that she can care for her widowed father Shukichi. Determined to see his daughter wed, Shukichi and his sister lead Noriko to think that Shukichi plans to remarry, so that they can manoeuvre her into an arranged marriage. The film’s final sequences deliver a series of delicately calibrated blows to the heart. Saturday, July 14.

When a Woman Ascends the Stairs, dir. Mikio Naruse | Japan 1960 | 111 min. | PG | B&W | 35mm. An aging Tokyo bar hostess, a childless widow who remains faithful to the memory of her dead husband, focuses on supporting her mother, brother, and his son as she dreams of opening her own bar. The rich patrons she needs to finance her venture must be charmed and courted, but she attempts to stay aloof to maintain her dignity. The widow’s attempt to escape the place in which she must “ascend the stairs” to make a living every night comes to reflect a larger, societal entrapment. Tuesday, August 7.

Woman in the Dunes, dir. Hiroshi Teshigahara | Japan 1964 | 147 min. | R | B&W | 35mm. Woman in the Dunes focuses on an amateur entomologist, who, while on a weekend field trip, is persuaded by a group of villagers to stay the night in the shack of a young widow, who lies at the bottom of a sandpit. Waking in the morning to find that he has been imprisoned, he is forced to join the widow in shovelling away the sand that threatens to engulf them, their drive for survival igniting a sexual obsession. Friday, August 24.

Equinox Flower, dir. Yasujiro Ozu | Japan 1958 | 118 min. | PG | Colour | Digital. A glorious comedy of familial strife, Ozu’s first colour film returns to the director’s favourite theme of the arranged marriage, and the tensions that arise between generations over this disappearing tradition. Shin Saburi plays an old-fashioned paterfamilias whose long-suffering wife understands their two modern daughters in ways the intransigent man never can. When the eldest daughter of an old-fashioned family asserts her independence by choosing her own husband, her father grounds her, expecting her to bow to convention. Saturday, September 1.

Summer in Japan runs at TIFF Bell Lightbox from July 5 to September 1, 2018. Tickets are on sale now. For more information, and full lineup, check tiff.net/japan.